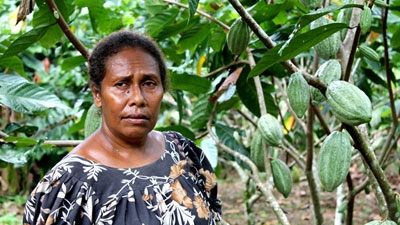 Port Moresby, PAPUA NEW GUINEA -- In 2006 the cocoa pod borer, a crop disease, decimated the cocoa of thousands of small farmers in Papua New Guinea’s East New Britain province. In total, the pest destroyed more than 80 percent of cocoa production, which took a devastating hit on the local economy.

Florence Mormor’s cocoa blocks were among the first to be infected.

“I had worked so hard to maintain my cocoa. It killed my morale. At that time, it was hard, really hard, to find the will to go on.”

Since then, the World Bank, the International Fund for Agricultural Development and other partners have been working with communities so that farmers like Florence can rebuild their livelihoods.

Under the Productive Partnerships in Agriculture Project, Florence will receive new seedlings that are more resistant to the disease, so that she can replant her block. She will also be one of the project’s ‘model farmers’ in her community.

When the crop disease struck, Florence started a ‘fridge garden’, with herbs and vegetables that she sells at the market, as well as a small floriculture business that has grown in recognition.

“More husbands are following the wives now that the cocoa is down,” she says. “People’s attitudes are changing. My husband is proud of me for bringing in money.”

Stronger role for women in agriculture

There are some vocal advocates of women’s rights in East New Britain, who are striving to ensure women get a voice where it matters most.

“Our aim is to get women together and help them see themselves as important economic producers,” says Kiteni Kurika, a field offer with the National Agriculture Research Initiative. “In this country women do 70 percent of the farming labor but their role in development isn’t recognized. They don’t see their worth.”

Six years ago Kiteni helped set up the ‘Women and Youth in Agriculture Initiative’– a network of cooperatives made up of women farmers. The project will work with eight of these groups in Central Gazelle to replant 500 hectares of cocoa, benefitting 500 women and their families.

Beyond this, women will have increased access to training in farm management, and support in developing business skills and ideas. This is where Florence will play a central role as a model farmer.

" With the project’s support, it can really open up women’s minds. We are already seeing women making decisions with their husbands, and sitting down together to plan for the future. "

Today more women in East New Britain can be seen as field workers, as trainers and model farmers. They are starting up new businesses, and in many areas, women like Florence are slowly gaining more respect.

There’s still a long way to go. In East New Britain, as elsewhere, there are too few examples of women holding senior positions in the agriculture sector; men still outnumber women on trainings, and in terms of access to financial and other services.

“When they get support from the group they feel more secure. They realize that they have something to contribute and take ownership of what they do. At the same time,” she adds, “the husband is also benefitting. On economic matters, they are working as partners.”

From men and women, there is a growing recognition that creating more leveled partnerships between men and women will enhance the sustainability of the project, for families and villages. This is the point, Kiteni says, at which the project can be truly transformational.