In Madagascar, a Community Rises Above Adversity 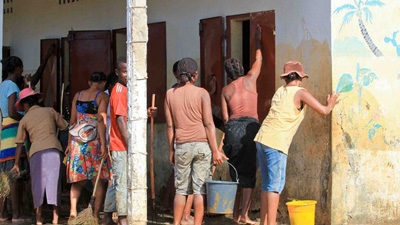 After a cyclone swept through Toliara, a coastal city on the southwestern tip of Madagascar, a primary school, completely damaged by the flood, managed to triumph over adversity with the help of the community.

Toliara, September 12, 2013 - Clarisse Rasoarilalao, the director of the public primary school (EPP) in Anketa-bas, an area of Toliara, a coastal city of 100,000 inhabitants on the southwestern tip of Madagascar below the tropic of Capricorn, can’t hide her pride. This year her school posted a record success rate on the exam for the CEPE (certificate of basic primary education), given at the end of the primary school cycle: 75.86%, as opposed to 52% in 2012. The figure is slightly below the national average (88.9%), but for the school’s teachers, pupils and parents, it is a triumph over adversity.

" The last time we received our salaries was in February 2013. But after the cyclone, the parents could no longer pay us because of their own financial difficulties. That didn’t stop me from continuing to teach, because we have to think of the children. "

Community teacher at the public primary school in Anketa-bas

Hit by cyclone Haruna, which devastated the south of the island in February, the school was completely flooded only a few months before the exam season. Alfred Rocky Helliot Raharison, president of the EPP parents association, points to a line on the classroom walls, five feet above floor level. This is the water mark left after a seawall gave way, inundating the entire neighborhood. “Everything was lost¾chalk, school reports, textbooks, exercise books,” laments Ifaliako Nomenjanahary, one of the teachers.

The damage was so severe that the school had to close for more than a month. “The long interruption hampered the seventh-grade classes, which were preparing pupils for the CEPE examination,” says Clarisse Rasoarilalao. According to Aurélie, a mother whose daughter attends the school, “The children themselves insisted that the school be fixed up so they could return to the classroom.” At the request of Anketa-bas residents, and with the aid of the Development Intervention Fund (FID), a community clean-up and sanitation project was quickly established for the school site.

Throughout the southwest of the island, 61 labor-intensive public works (HIMO) projects were organized immediately after the passage of Haruna, mainly to clean up and sanitize the affected areas. The projects were chosen collectively at a general meeting of the community. At each site, 150 people worked five hours a day for 30 days, at a daily salary of 2,500 Ariary (US$12.50). More than 9,000 people in seven districts were employed on these projects.

This “cash for work” social protection method has distinct advantages over the “food for work” method. Indeed, as noted by Ialy Radio Donat, regional director of the FID in Toliara, “The people affected have needs that go beyond food; receiving a salary allows them to deal with their most pressing issues, and restores their dignity through compensated work.”

The World Bank provided $170,000 to the FID to finance these activities. “The support from the World Bank and the FID really let us get back on our feet. Thanks to them, the school was quickly cleaned up so that our pupils could get back to class and prepare for their exams,” says Clarisse Rasoarilalao.

“The goal was to give the disaster-stricken population access to immediate financial resources. These are often people living in poverty, and cyclones intensify their vulnerability,” said Haleh Bridi, World Bank country director in Madagascar. “The good results achieved by the Anketa pupils attest to the importance of the post-cyclone activities financed by the World Bank and executed by the FID, but they are also a tribute to the remarkable spirit of cooperation demonstrated by the whole community in the face of adversity,” she adds.

Nothing illustrates this better than the testimony of Ifaliako Nomenjanhary, a community teacher normally paid by the Parents Association. (The system of community teachers was established to make up for a lack of state resources for education. Today in Madagascar only 33% of teachers in public education are government employees.) “The last time we received our salaries was in February 2013. But after the cyclone, the parents could no longer pay us because of their own financial difficulties. That didn’t stop me from continuing to teach, because we have to think of the children,” she says.

Thanks to these community clean-up and sanitation projects, daily life is back on track in the districts of Toliara devastated by Haruna. However, enormous challenges remain. “Agricultural areas north of the city of Toliara were hit hard by Haruna, and many fishermen lost their boats,” observes Toliara’s mayor, Dr. Hatimo Fiacre. “This poses a risk for the city’s future food supply.”

In Madagascar, a Community Rises Above Adversity