Solomon Islands is Better Prepared for Disasters through Gender Awareness 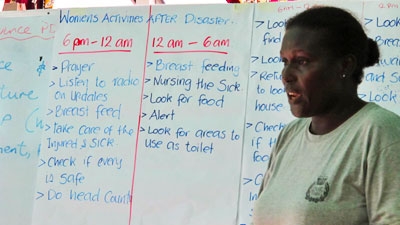 Workshops on gender in emergencies are helping the country develop a better disaster risk management plan to meet the different needs of its population. Watch video

When a large earthquake and tsunami struck Solomon Islands in 2007, the country was caught off guard. There were no disaster management plans to deal with the scale of the disaster.

Earthquakes and tsunamis are not the only natural hazards that pose danger to its population of over half a million people scattered across the archipelago. Cyclones have been the usual visitor. Sea level rise and tidal surges, which are occurring at an increasing and unusual pattern, are a new type of hazard the country is now coming to terms with.

This year, with World Bank support, Fred has helped deliver a ‘gender and protection in emergencies’ training program, in partnership with the Solomon Island’s Government through the National Disaster Management Office.

Workshops on Gender Protection in Emergencies

From May 2012 to June 2013, workshops on gender protection in emergencies were held in four provinces.Participants included local government staff, police, protection and disaster risk management representatives, and civil society members.

The workshops were designed to give a solid understanding of the different needs and abilities of the participants to help design standard operating procedures for provincial emergency response.The workshops also alerted participants, especially men, to the special vulnerabilities women might face during an emergency, for example pregnancy or lactation, which translate to different needs such as separate bathrooms, enforced security or access to female doctors.

" The training enabled me to understand and define my relationship with other people, especially women, because we are equal. So, decision making becomes more important when I understand gender "

“The training enabled me to understand and define my relationship with other people, especially women, because we are equal. So, decision making becomes more important when I understand gender,” says Enley Saeni, a young man who had participated in disaster response activities in Temotu province earlier in the year.

Ridley Agiomea, a meteorological officer for over 20 years said he now understands that gender is not about men and women. It concerns life, and is about treating everybody with equal consideration.

“I hope it will help me try to help others, especially my colleagues to have a new understanding so that when we deliver services through our work, we see everybody on an equal basis.”

Rebecca Awa-Filo is team leader for a Save the Children Youth Outreach Partnership Project which integrates disaster risk reduction activities at communities they work in. While she admits that gender is an issue that authorities and  people in her position tend to forget during times of disaster, the workshop sessions on gender and protection have helped her to focus better on her work with communities.

“I feel empowered to be able to facilitate some avenues to help women, girls, boys and men in the community to realize gender and protection issues during emergencies,” she said.

“When we deliver these trainings and talk about gender and protection issues, people sometimes feel touched by these issues. Apart from experiencing it, now they realize that it is part of disaster management, and issues that they address during emergencies.”she continued.

Suzanne Paisley, The World Bank’s Disaster Risk Management Specialist, said that, “"The National Disaster Management Office recognizes the importance of considering gender for effective disaster risk management. It's very satisfying to note that by the end of the training, the provincial participants can see this too.”

The World Bank has been supporting the gender and protection in emergencies pilot trainings with support from AusAID through the World Bank East Asia and Pacific Infrastructure for Growth Trust Fund.