Some residents of Chisinau complain that they're sick of the noise and the dust, but even they will agree that, well, the inconvenience is worth it. After all, the whine and roar of construction equipment are signs of improvement for the 800,000 people living in and around Moldova's capital city.

Workers are laying new pipes for better connections to Chisinau's main water and sewage systems. The work will improve both access to drinking water and the quality of the water, according to Chisinau's deputy mayor, Histor Grozavu. "This work means there will be no more breakdowns on water," he says. "For some people, in the past, the water supply would sometimes shut down."

Just down the street from some of the construction lives Polina Florea, in a green house protected by high walls. She complains that she's sick of the workers, who sometimes block the road with their big trucks, but she grudgingly admits she supports the work. "Oh, it is good because people have water and they deserve water." She's especially pleased, she says, because the new water pipes will improve things for her neighbors and, she says, "they are good people and we are all friends."

Her daughter, Tamara Kravcenko, who's helping her mother make dinner, agrees. "Undoubtedly this is good for the city, those pipes were very old, about fifty years old. It is good for the people who live along the road because they'll get better water, so it is a good thing, despite the mess."

The new pipes will cut down on leaks and evaporation, saving both water and maintenaence costs. The city currently loses about 35 percent of its water supply to leaks and spills. "People will get continuous water," says Vitalie Midari, the deputy technical director for the water supply project. "Also, the quality of the water will improve, and that will have a good impact on the population."

The city of Chisinau with support from IFC, part of the World Bank Group, is not only improving its water supply, workers are also repairing and upgrading roads. More than two hundred thousand drivers hit the roads here, and that number is rising by about 8 percent a year. The sheer volume creates traffic jams on some of the narrower streets, especially the ones with the biggest potholes.

Chisinau's drivers say they're pleased with the work, they just want it to continue. A man driving a mini van says, "we're glad the roads are improving, but lots more work is needed." Another driver agrees, pointing to the road ahead. "This part of the road is okay, but it is time to get the really bad roads fixed." And a woman driver pleads for more. "The quality of the repaired roads is good," she says. "We just need the repairs to continue!"

City officials say the new water and sewage lines, plus the road repairs, will make Chisinau a better place to live. In the medium term, they hope, the upgrades will attract more private investment, which in turn, could provide for more improvements. Chisinau is one of Moldova's prime economic engines; it is home to 25 percent of the country's population, and it generates about 50 percent of the economic output. 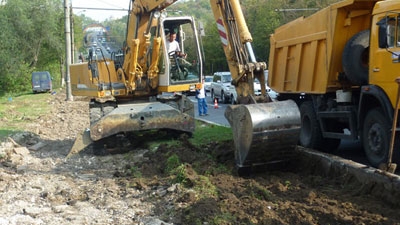