Women of Côte d’Ivoire Speak Out 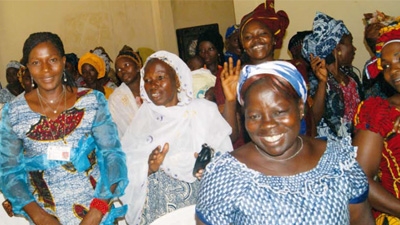 ABIDJAN, August 6, 2013 ¾ On the African continent, where the majority of the population subsists from agriculture, only 18% of farmland is owned by women. In Côte d’Ivoire, the world’s top producer of cacao and cashews, a woman is usually obliged to make arrangements with her family or husband in order to cultivate food crops.

As the country struggles to recover from a decade of socio-political crises, Ivorian women remain marginalized, often without access to basic social services, according a recent World Bank report.

In rural settings, 75% of women live below the poverty line. They are hardly better off in the business realm: According to figures from the “Centre de Promotion de l’Investissement en Côte d’Ivoire” (CEPICI, a group that fosters investment in the country), out of 800 small businesses created from January to May 2013, only 15% were in women’s hands.

The political scene is also dominated by men, although women constitute more than half of the electorate (52%). Out of 29 government ministers, five are women, and only 10% of deputies in the National Assembly are female.

How can Côte d’Ivoire end discriminatory practices against women? This was the theme of workshops and consultations the World Bank held recently throughout the country. The objective: to allow Ivorian women to speak out and to arrive at concrete measures promoting women’s empowerment in a strategic period, as Côte d’Ivoire sets its sights on becoming an emerging country by 2020.

Madani Tall, the World Bank’s director of operations for Côte d’Ivoire, expressed this goal in his kickoff speech for the consultations. The aim, he said, was “to take into account the legitimate aspirations of women, whose daily lives are tied to the reality of the land, women (…) who not only have much to say, but above all, have much to teach us.”

Workshops were organized around four themes: the role of tradition, women’s place in public space, female entrepreneurship, and combating violence against women. (Statistics from the Ministry of the Family, Women and Children indicate that fully 36% of women in Côte d’Ivoire are victims of physical or psychological violence.)

A total of 376 women were consulted, representing all socio-professional categories. Men were also invited to take part in the discussions, especially traditional chiefs and religious leaders, the latter sometimes perceived as stumbling blocks to women’s emancipation.

“The consultations allowed women from different regions of the country to hear each other, share their experiences and make their aspirations known,” said Félicité Essoua, president of a women’s co-op in Sanwi, who attended the workshop held in the southeast part of the country.

“Even if there is equality on paper, the reality out in the world is quite different,” explained writer-journalist Agnès Kraidy. The World Bank tapped Kraidy, the former editor-in-chief of Femme d’Afrique magazine and the Côte d’Ivoire daily Fraternité Matin, to lead the consultations and prepare a report on the results.

“In 2000, Côte d’Ivoire voted for a constitution that proclaims equality for everyone in the eyes of the law, and now Parliament has voted in a law that amends the marriage code and abolishes the concept of head of household. However, even though the laws exist, often they are not enforced. What’s needed is to move from theory to action,” adds Kraidy, a tireless activist for women’s rights.

Among the concrete measures proposed during the workshops were the creation of a one-stop bureau to facilitate women’s access to real estate; incentive measures for girls to enroll and stay in school; calling for a vote on a law to establish male-female equality in all domains; setting up a training center for female entrepreneurs; and the construction of resource centers and legal clinics for women who are victims of violence. “It would be a shame if our recommendations aren’t followed up. The abuse of women in my country is very real, especially in rural areas,” says Dominique Loua, president of the Union des Femmes pour la Lutte contre la Pauvreté (a women’s anti-poverty union) located in Biankouma, in western Côte d’Ivoire.

A springboard to independence

Titled “Women in Côte d’Ivoire: What Strategies for Empowerment?” the report that emerged from our consultations was delivered to Côte d’Ivoire’s prime minister last June. The World Bank is committed to making equality between men and women a core element of its development programs and has created the Gender Innovation Lab to explore possibilities.

Amah Marie Kouamé, president of the Union des Associations des Déplacés Retournés Volontaires et Victimes de Guerre (an umbrella group for associations that aid returning refugees and war victims), said, “We congratulate the World Bank for this opportunity to reflect on our future and imagine a Côte d’Ivoire at peace. For us, women who have lost everything during the military-political crisis, who have had to flee our homes and businesses, returning has not been easy.” Her group is headquartered in the Bandama valley, a region in the country’s center that is heavily affected by ongoing conflicts,

She added: “What I would wish for women in my country is to have the World Bank set up micro-finance structures so we could engage in revenue-producing activities.” In her view, Ivorian women don’t need a handout if they have the means to be independent.