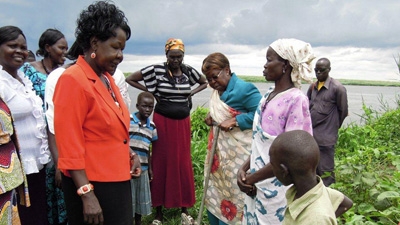 JUBA, July 9, 2013 -- While the status of women in Sub-Saharan Africa is improving, women in the world’s newest country are still recovering from decades of conflict.

With more than 85% of births still occurring in the home and only three percent of mothers receive effective antenatal care, the majority of South Sudanese women have a greater chance of dying in childbirth than finishing school. More than 82% of women have no formal schooling and only five percent have finished primary school.

As the nation celebrates its third Independence Day, efforts to reduce the country’s maternal mortality rate are slow; one in seven women in South Sudan die during pregnancy or childbirth. Yet despite statistics, South Sudanese women have a spirit and resilience born of providing and caring for their families during the difficult war years, and the government is poised to help women succeed.

“We must assist women to improve their lives and lift themselves out of poverty,” said Agnes Kwaje Lasuba, Minister for Gender, Child and Social Welfare. “In our culture, women are at the heart of the family.”

Plans to improve the welfare and wellbeing of women began in 2005 with the signing of the peace accord and the slow process of “gender mainstreaming” has followed. In 2012, consultations ended in a landmark conference where key national and international stakeholders agreed on a National Gender Policy. The policy is based on a Country Gender Assessment and supported by the Multi-Donor Trust Fund for South Sudan (MDTF-SS) with a US$10 million grant for the Gender Support and Development Project. The grant also included US$4 million component for Women’s Economic Empowerment.

Lasuba said the project was one of the country’s most successful, providing US$50,000 to 108 women’s groups across the country, supporting more than 7,800 women in their economic goals and providing training for 3,000 more.

The Bor-based Future Women Group received support through the grant, and the collective now owns a shop selling dresses, cosmetics and accessories. A woman in a polygamous marriage said that before joining the group, she was very stressed because the senior wife used to take all her husband’s salary.

“Now I am at ease because I can feed my children and pay their school fees,” she said.

The Jonglei Women’s Association, a group of 59 women, cultivated 48 acres of land, harvesting 195 bags of maize, as well as tomatoes, onions, eggplants and beans. A similar success story involves the Widow Women of Malakal in Upper Nile state who are rebuilding their lives, farming vegetables on land donated by the government and the community. They sing motivational songs as they work in their fields and have also opened a coffee shop in town which allows them to cater to most of their family needs.

Given the low status of women, the World Bank financed the US$2.2 million Adolescent Girls Initiative in 2009, teaching 3,000 young women livelihood skills, providing them with credit and supporting broader community sensitization to give them a better start.

This successful pilot will now inform the US$21 million Safety Net and Skills Development Project, funded by the International Development Association, which will focus on youth and women.

“Understanding the traditional cultural constraints as well as the existing land titling and ownership process which is unfavorable to women is important if we are to help more than half the households in this country which are headed by women,” said Museme Munira, who heads the World Bank’s gender work in Juba.

These efforts are the beginnings of a long journey of transformation for the women of South Sudan which must include substantive improvements in their health, nutrition and education. As new research by the World Bank shows, huge gains have been made already in primary school attendance where 40% of the students are girls. Similarly, the number of children dying within the first year of birth has also reduced substantially, showing signs that development assistance is beginning to make a difference in South Sudan.