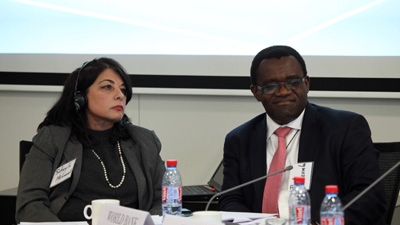 WASHINGTON, June 26, 2013—In 2012, an estimated 30 million African migrants sent $60 billion in remittances to support more than 120 million family members back home. The link between migration and remittances is significant.  Initially, the migration of African professionals was seen as a “brain drain”, but has now given rise to various gains, including technical expertise, remittances and other development skills that Africa needs, and which the Diaspora is willing to impart.

Based on the importance of remittances, in 2012 the Global African Diaspora Summit adopted the African Institute for Remittances (AIR) as one of five flagship/legacy projects of the African Union (AU). One of the main objectives of the project is to facilitate the establishment of the Institute. The second is to provide technical assistance and capacity building to AU Member States in implementing concrete strategies to manage remittance flows as a development tool for poverty reduction, thus benefiting senders, receivers and other stakeholders.

Since the Diaspora communities are the main remittance senders, several sensitization events shall be held to exchange views with them on how best AIR can meet their needs. The first of these was held in Brussels on May 16, 2013.

Chairing a panel during the AIR Forum in Brussels, Paul Noumba Um, Sector Manager of the World Bank’s Finance and Private Sector Development, said “the link between migration and remittances, resulting in a $60 billion safety net for African households, should not only finance consumption, but should be partially used for productive investment.”

“Remittances are no longer a stand-alone agenda, but are related to a broader development agenda built around technology, financial literacy and microenterprise,” he said.

Noumba Um added that the AIR is an important initiative meriting the full backing of the World Bank, since it would become an operational platform to support African countries. He urged the Diaspora to step up and help coordinate activities, especially regarding ways in which to help remittance beneficiaries employ their money more effectively.

The AIR project is an initiative in which the African Union Commission (AUC), the European Commission (EC), the World Bank, the African Development Bank (AfDB), and the International Organization for Migration (IOM) are collaborating in its creation as an AUC specialized Institute.

Camilla Hagstrom, Head of Section, Unit B3–Migration and Asylum, (EU), recalled the significant commitments the EU has adopted contributing towards cheaper, faster and more secure remittances in order to augment their development impact. Against these commitments there has been progress, but at the same time, there is still significant room for improvement in all remittance related areas, with initiatives required at different levels: from European Commission services, EU Member States and partner countries.

“As far as our future priorities are concerned, we believe that more attention needs to be paid to the social consequences of remittances as well as to South-South flows,” said Hagstrom.

The AUC was represented by Cheikh Niang, AU Social Affairs Officer, who expressed AUC’s firm commitment to materializing the AIR project for development of the continent.

The IOM’s Anna Eva Radicetti, Head of Unit, Regional Policy and Program, said that well-managed migration was an important ingredient of socio-economic development and there is growing recognition of its development potential. She assured the Forum that IOM stood ready to listen to the Diaspora and provide active support to AIR, notably through its expertise and existing collaboration networks involving governments in Africa and other global regions, regional and sub-regional cooperation bodies, as well as strong links with diaspora communities worldwide.

Floriburt Ngaruko, Chief Learning Officer of the AfDB stated that remittances were gaining recognition as one of the more positive aspects of migration, which for the most part had been associated with negative effects such as the brain drain.

Representatives of the Diaspora communities at the Forum concurred with the need to take advantage of remittances to promote financial inclusion and identify investment opportunities. It was also emphasized that all parties involved—development institutions, donors, governments, and the Diaspora—should strengthen ties and maintain an active dialogue in order to work together effectively.

“A decision on the location of AIR is needed soon from AU member states, otherwise stakeholders will lose interest,” said Soheyla Mahmoudi, AIR Project Task Team Leader and Senior Operations Officer in the Bank’s Africa Region. “Time is of the essence, there has been much analysis and discussion, but AIR is still on the drawing board,” she added, explaining that “one of the ultimate goals of the institute is to reduce the cost of sending money within and from outside to Sub-Saharan Africa.”

During the Forum, the SMA Database was presented. Its main purpose is to increase transparency by providing cost information to migrants, authorities, researchers, private entities and Diaspora organizations. Together with the sensitization of the development potential of remittances and the evaluation of regulatory frameworks, these were the three main project activities besides facilitating the creation of AIR itself.

In summary, the main conclusions of the Forum were: