In Cameroon, Agriculture Is Reemerging as a Promising Industry 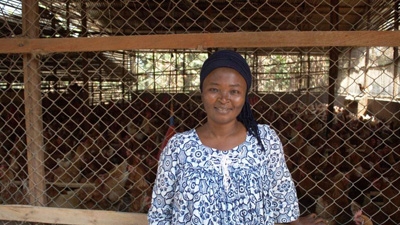 Yaoundé, June 18, 2013_ In Cameroon, young people are returning to the land, a trend that is closely linked to the launch three years ago of the Agricultural Competitiveness Project (PACA).

This World Bank-financed project, valued at US$60 million and slated to last for seven years, seeks to boost the country’s agricultural productivity by developing rural infrastructure facilities, and investing in value chains such as rice and maize cultivation, as well as in the production of broiler and pork meat.

“PACA has changed attitudes toward agriculture, which is no longer looked down upon,” says Félix Nkapemin, a PACA expert. “Nowadays, candidates for PACA financing are essentially young Cameroonians who, having obtained their diplomas, have decided to become farmers, acquire land, grow maize professionally for trade, and manage their enterprises in order to earn a living,” he says.

In Cameroon, agriculture represents more than half of the country non-oil export revenues and employs almost 60 percent of the working population. Ninety percent of rural households are, in one way or another, employed in agriculture, and approximately one-third of them earn their living from export crops. According to PACA’s figures, more than half of the project’s beneficiaries are young people.

According to Manievel Sene, World Bank team leader for the project in Cameroon, PACA has also facilitated access to credit for farmers through the establishment of partnership agreements between producer organizations and microfinance institutions. As a result, approximately 10,000 producer organizations are involved in economic partnerships that finance investments geared toward addressing critical production, marketing, and/or agricultural processing problems.

“The project has helped us access drying and preservation infrastructure facilities, which allowed us to cultivate 50 hectares of maize in 2012 instead of the 28 obtained in the previous year,” says Gilbert Kanango, a young farmer and member of the commercial interest group, IPIM, an association of farmers based in Bertoua, capital of the East province. “Better still,” he added, “in anticipation of the increase in our production, we have acquired much more efficient maize threshers.”

Rebecca Kamgue, a farmer from the maize production area in the Littoral Region, happily noted that this year, farmers were able to harvest 350 metric tons of maize in one year and were anticipating 500 metric tons for the next harvest.

According to Gregor Binkert, World Bank Country Director for Cameroon, agriculture is one of the priorities of the World Bank’s support strategy for the Cameroonian Government. “As a result, PACA is one of  the main tools that can help address the challenge of agricultural competitiveness, food security, income generation, and job creation in rural Cameroon,” he says.

To date, 744 (74.4 percent) of a final target of 1,000 subprojects have been approved.  Designed to directly benefit small farmers and their organizations, PACA seeks to assist approximately 20,000 rice growers in the irrigated areas currently being rehabilitated, and 20,000 small agricultural entrepreneurs organized in cooperatives.

The PACA project has also financed the rehabilitation of the road network in the farming zones. Its impact therefore reaches other actors along the value chain, such as traders, carriers, and of course, consumers.