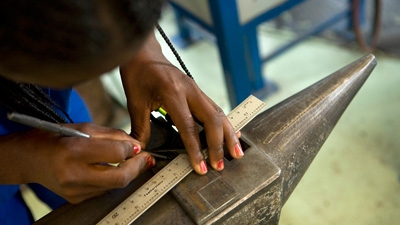 NIAMEY, June 11, 2013 – In Niger, a country where 67% of the population is under 25 years of age, the problem of youth unemployment and underemployment is acute, given that the lack of job opportunities threatens to undermine the country’s political and economic stability.

“You, the young people of Niger, have the potential to become an engine for development in Niger, provided that sufficient investments are made in health and human capital,” said Sri Mulyani Indrawati, Managing Director of the World Bank Group, during her recent visit to Niger at a meeting held at the World Bank offices in Niamey with about 40 young entrepreneurs, civil society representatives, officials, and students.

To tackle youth unemployment, the World Bank has recently launched a program focused on vocational training and will invest $US30 million in the “Niger Skills Development for Growth Project” over a six-year period. The idea is to promote entrepreneurship (11,000 young people aged 15 to 25 will be targeted by this program).

“As a result of the poor quality of primary school education, the fact that secondary education is limited and ill-suited to current needs, and the lack of options for technical and vocational education and training (TVET), young people lack the academic, technical, and entrepreneurial knowledge required by the job market,” explained Boubou Cissé, a World Bank economist based in Niamey. “Consequently, unemployment, underemployment, and a shortage of skilled labor coexist, and this represents not only an impediment to development but also a source of frustration among youth.  Clearly,” he added, “it is also a contributing factor to social instability.”

Although the socioeconomic conditions of young people have improved somewhat over the past few years, and the primary school enrollment rate rose from 37% in 2001 to 76.1% in 2010/2011, there are still sharp disparities between regions, socio-economic groups, and genders. In 2011, the national gross enrollment ratio (GER) for boys was 84.9% compared to 67.3% for girls, while the GER in urban areas was 99.1% as against 70% in rural areas. In contrast, in secondary school, the gross enrollment ratio was 10% in 2010.

According to figures from the Ministry of Vocational Training (cited in a study on the vocational integration of youth in Niger by the economist Anne Le Bissonnais), a million and a half young people ages 13 to 19 are neither in school nor employed, and more than 50,000 graduates are unemployed.  The adult literacy rate (one of the lowest in the world) was estimated at 29% in 2009/2010.  Among women ages 15 to 49, the rate is only 11.6%, compared to 27.8% for men.

“The objective of the skills development project is precisely aimed at enhancing the quality and effectiveness of technical and vocational education and training  in Niger by offering on- and off-the job training in priority sectors such as public works, agriculture, and tourism,” noted Boubou Cissé.

“Young people will be trained for jobs in the emerging sectors, since the purpose of this program is to boost their employability. Courses in appropriate skills will be offered, and entrepreneurs will be trained so that they can contribute to the country’s economic development, in close cooperation with the private sector,” he added.

As noted in a World Bank report on youth employment and underemployment in sub-Saharan Africa, the creation of viable jobs for young people is a precondition for sustainable development in Africa.