Building a Better Future for the Farmers of Kaback 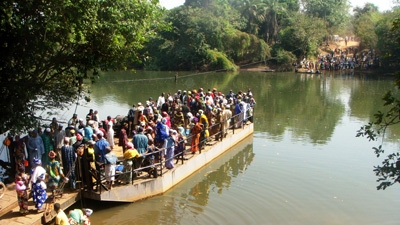 KABACK, June 10, 2013_ In Kaback, an island located 70 kilometers from Conakry, the capital of Guinea, the construction of a new 100-meter long bridge will brighten the future of this small community of fishermen and farmers.

Considered Guinea’s rice bowl owing to its vast rice fields, this region had suffered from its lack of access to major market areas. The ferry that once linked the island to the rest of the country has been out of order for several years.  Residents were therefore forced to use makeshift canoes to travel, transport tons of rice, and sell their produce on the national market.

The Kaback bridge is one of three funded in the region by the World Bank for the Guinean Government under the Second National Rural Infrastructure Program (PNIR2).  Like the Kaback bridge, the Madina-Oula bridge, which is nearing completion and is located on the Kolenté river in the Kindia region at the border with Sierra Leone, will facilitate the channeling of agricultural produce toward commercial hubs.  This bridge, which is 100-meters long, 7-meters wide, and 12-meters deep, will also accommodate the flow of traffic and trade among the local people and boost trade at the different weekly markets operating on both sides of the border.  Because the ferry used since the colonial era often breaks down, passengers experience serious problems and sometimes have no choice but to spend the night on the docks on either side of the river.

In Dalaba, the Téné bridge (23-meters long) is also providing access to a big agricultural production and market area as well as an additional route to connect other prefectures in the Moyenne Guinée area.

Kaback island is also the beneficiary of the West Africa Agricultural Productivity Program for Guinea (WAAPP-Guinea), financed with a US$9 million grant from Japan and administered by the World Bank, which aims to boost rice productivity.  Female parboilers have been the recipients of parboiling and husking equipment.

Since the launch of the program in January 2012, eight unions and women’s groups from Guinea’s four natural regions have received equipment and proper training.  Four hundred women from these eight unions have been trained in enhanced parboiling techniques, the handling of processing equipment, professional organization processes, processed product quality, and marketing.

The processing of paddy rice by parboiling and husking is an important phase in the rice production system, in particular in post-harvesting activities in Guinea. Parboiling is done mainly by women using traditional techniques. In the past, cooking in a parboiler required a very large amount of firewood which was gathered to be burned.  During this operation, female parboilers were exposed to heat from flames and to dangerous fumes emitted by the wood.

“These machines make our work less strenuous and facilitate parboiling, which is very difficult work.  In the past, we used to go to the bushes to cut wood.  Large quantities were used and the yield was low.  Since we have this equipment, the work is less strenuous and we are less exposed to heat, dust, and diseases,” states Fatou Sacko, the parboilers’ spokesperson in Kaback.

Boubacar Diallo, the Project Coordinator, stresses that “this equipment considerably improves the working conditions of parboilers.  The wood is placed directly in the stove, a process that greatly reduces cooking time and improves yield.  With this new technology, parboilers obtain 120 to 130 kilograms of rice per batch.”

“I am pleased to see the interest of these female parboilers in this equipment and its efficient operation.  Guinea’s experience could serve as an example to the other countries involved in this program,” explains Yao Alexis Haccany, the WAAPP-Guinea Project Manager who recently visited Kaback island to view firsthand the progress made and the operation of the equipment provided to women.

In the context of implementation of the West Africa Agricultural Productivity Program (WAAPP-1C), in 2012, seed centers in Kilissi (Kindia), Koba (Boffa), and Bordo (Kankan), as well as the National Council of Farmer Organizations of Guinea  (CNOPG), produced and delivered 1,300 metric tons of high-quality, packaged, and wrapped rice seeds in labeled bags (WAAPP). In 2013, this quantity of seeds could cover an area close to 20,000 to 25,000 hectares.  To date, 750 seed farmers, 40 of whom are women, have received training in seed production techniques.

In the Soussou national language, the women of Kaback expressed their appreciation and then went on to request more equipment...