The topic: climate change. Around the table: representatives of some of the world’s top philanthropic foundations and World Bank Group President Jim Yong Kim.

They met at the World Bank in Washington earlier this month to look for ways to work together on one of today’s most pressing issues – how to stop the Earth from warming to the point where millions of people, rich and poor, will be threatened by extreme weather, rising seas, and declining agricultural yields.

Despite the scale of the problem, no global plan exists that is equal to the task, said Kim. The level of scientific research needed for solutions is “not even close.” There is a “tremendous lack” of financing.

“Something is not quite clicking … What will it take to rise to the challenge?” he asked.

The question brought a flurry of comments and ideas, some already in play. Among them, helping cities, where 75% of the world’s population will live, and which will produce 80% of global greenhouse gas emissions by 2050.

This month, the Rockefeller Foundation announced its 100 Resilient Cities initiative, a $100 million effort to build disaster resilience in cities around the world.  The foundation, celebrating its centennial anniversary, helped New Orleans recover in the aftermath of Hurricane Katrina and led the New York resilience commission after Superstorm Sandy. Its Asian Cities Climate Change Resilience Network addresses climate change vulnerabilities and urban issues. The new initiative will give 100 cities access to the latest best practices and help them develop and implement a disaster resilience strategy.

“We have had unbelievable expressions of interest,” Rockefeller Foundation President Judith Rodin told the World Bank Group Foundations Advisory Council on May 17. “Cities are on the front lines; this is where all of the population will be all over the world, but particularly in Asia, Africa, and Latin America. The growth is so incredibly dramatic. We have got to do something. “

Of the top 100 urban areas of the world, 70 are clients, but only eight are credit-worthy, said Rachel Kyte, vice president of the Bank’s Sustainable Development network. They can’t get the financing they need for sustainable urban development, let alone to plan for and withstand disasters. This is an area where foundations and the Bank Group could combine forces to help, she added.

“What we want to do is find things we can do that would leverage what you’re doing,” said Kyte. 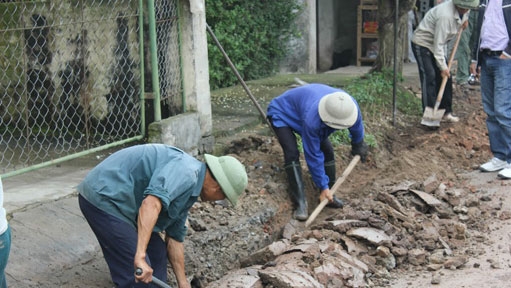 That goal holds true for more than just climate change. The Bank Group wants to build on its already strong 40-year working relationship with foundations to help achieve two ambitious targets by 2030: cutting global poverty to 3% and boosting incomes for the bottom 40% in each country. Without help from partners, "we're not going to get there," said Kim.

Foundations contributed $1 billion to Bank-managed trust funds between FY08 and FY13 – about 2% of the Bank Group’s budget. The Bank aims to ease the way for foundations to work more directly with the Bank.

More than 80 foundations partner with the Bank on initiatives, such as one with the Bill & Melinda Gates Foundation providing care to millions of tuberculosis patients, or with the William and Flora Hewlett Foundation to measure the quality of health and education services. Another with the Gordon and Betty Moore Foundation has contributed to a 63% increase in protected area of the Amazon forest.

IFC, a member of the World Bank Group and the largest global development finance institution focused exclusively on the private sector, partners with foundations to leverage their efforts. Priorities include filling critical gaps in access to finance for small and medium enterprises — a vital source of jobs — health care, environmental and social sustainability, and investment in and training for smallholder farmers.

“We are ready to be innovative, to use our capital and work together; IFC’s involvement gives validation for others to invest,” IFC Executive Vice President and CEO Jin-Yong Cai told foundation members.

Among other causes, foundations back:

The Bank also collaborated with several foundations and other partners to launch the Global Partnership for Social Accountability (GPSA) a year ago — a potentially powerful and transformational tool to amplify citizen voice and accountability, said Sanjay Pradhan, vice president of the World Bank Institute.  Some 15 countries are participating, with others in the process of opting in.

The partnership is part of a movement to open up information, data, and knowledge to create a more transparent and participatory development process. The Bank Group has opened its own data and research to the public, and is working with countries and donors to open government budgets, development-related contracts, data on aid flows, projects, and the private sector.

The Aga Khan, Ford, Gates, Hewlett, Charles Stewart Mott, and Open Society foundations, along with the German Marshall Fund and TrustAfrica, helped develop GPSA, whose grants will build the capacity of civil society and citizens to participate in open development. The Aga Khan foundation was the latest partner to announce funding for the GPSA at the Foundations Advisory Council meeting last Friday.  , Ford contributed $3 million at the launch of the GPSA, and OSF recently committed a further $3 million in parallel funding.

“We have the chance to put citizens at the center of development,” said Pradhan. “This partnership can be the bridge between the demand and supply sides of governance and bring the voice of the poor and the marginalized onto the table of these big players of development,” he said.