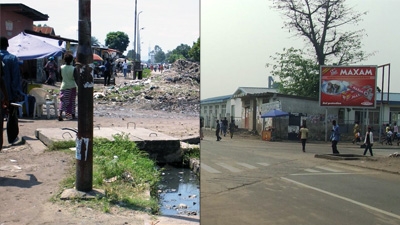 Avenue Ngiri before (left) and after (right) renovation.

KINSHASA, May 20, 2013—Along the Nlandu road to the Democratic Republic of Congo’s capital city Kinshasa, small businesses are springing up and local entrepreneurs are thriving. This is because Nlandu road is newly renovated.

“The occupancy rate in our hotel, which was almost zero before the renovation of avenue Nlandu, is now 80 percent,” says Adrien, a hotel manager along the main road. “Most of our guests come from other communities and they are the ones who are most surprised by the quality of the road.”

The Nlandu road, along with several other arterial roads leading into Kinshasa, was rebuilt as part of the World Bank-financed Emergency Urban and Social Rehabilitation Project or PURUS. The US$180 million project included the rehabilitation of 40 kilometers of road in Kinshasa, 30 of which are completed and the last ten kilometers will be completed by the end of May. Thanks to the rehabilitation of the urban roads, the project will benefit two million people, giving them better access to markets, health care, schools and more.

Infrastructure in the Democratic Republic of Congo was heavily damaged by the country’s 6-year civil war. In 2006, the government made the rehabilitation of roads and other infrastructure its priority.

“Expanding and upgrading infrastructure is critical for economic development in the Democratic Republic of Congo,” says Eustache Ouayoro, World Bank Country Director for DRC.  “These road renovations are enabling commerce, connecting communities to bustling Kinshasa, and perhaps most importantly in a post-conflict setting, linking people for greater social cohesion.”

Today, shops, pharmacies and bars are opening in the town of Bumbu, just south of the capital, and in its neighboring town Selembao.

“I now operate an electronic games store,” said one young man from Selembao. “There are about 10 of us who are young, small business owners and we currently earn between $15 to 20 per day.”

A young female vendor, who previously could sell only a few “bikolos” (small plastic containers equal to about 1 kg) of cassava flour, says she now sells one or two basins per day.

In addition to Kinshasa’s arterial roads, the project financed the expansion of the distribution network from the recently-rehabilitated water treatment plant of Lukaya (in the Western part of Kinshasa) to poor neighborhoods. This is expected to provide access to drinkable water to approximately 150,000 people who currently rely on inadequate water sources.

"Poor infrastructure in DRC is responsible for productivity losses as high as 40 percent," says Jamal Saghir, World Bank Director for Sustainable Development, Africa Region. "By making much needed investments in infrastructure, we can reduce costs to businesses by 80 percent, and lower the cost of moving agricultural products by 70 percent.  These quick wins are achievable and will help to lay the foundations for sustained economic growth and durable peace."

According to Mahine Diop, the World Bank’s Task Team Leader for the PURUS project and a senior municipal engineer, by targeting the priority needs of the populations, the project has contributed greatly to the movement of people and goods in Kinshasa.

“It has also helped to better structure the urban space and develop employment and income-generating activities,” Diop says.

Despite the results of the PURUS project, Diop says upgrades are just the beginning.

“Now we have to face the challenge of maintaining it, and this cannot only be done by the authorities, it has to be done by everyone,” he says. “A substantial maintenance budget must be allocated each year to prevent an early deterioration of this asset.”