Life After Rebellion in Uganda 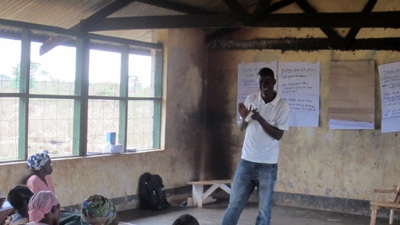 As part of the TDRP project to strengthen economic associations for groups affected by the LRA conflict, beneficiaries receive skills training to help them start small, income-generating activities.

GULU, May 16, 2013 – When he settled in to the village in 2004, he remembers neighbors giving him “bad looks” and saying “bad things,” and he worried about whether the community of about 200 people would ever accept him.

“Upon returning, the people in my neighborhood were suspicious of me,” said Ojok, who is now a trained carpenter. “But now they seem to accept that I am the same person as before, so I am no longer worried.”

Ojok is just one of thousands of former fighters in the LRA’s 17-year rebellion able to successfully rejoin his community through the World Bank-supported project aimed helping them socially and economically. Most of the former LRA rebels were abducted as children and forced into rebellion. The Emergency Demobilization and Reintegration Project (UgDRP), which closed in 2011, also contributed to peace-building, reconciliation and enhanced security for the country as a whole, but particularly in the northern region where the LRA movement was concentrated.

Beatrice Lakot, 24, was also abducted and forced to join the LRA when she was 13. She managed to escape four years later, when she settled into her Gulu community. There, she is able to take care of herself and her three children by running a grocery store in the market. Lakot is also a member of a savings cooperative supported through Bank-funded operation implemented by the Amnesty Commission.

“I am a member of the Kalulu Savings, with nine members where each member contributes 10,000 Uganda Shillings (US$4) every month,” Lakot said. “All money collected goes to an individual and every member receives money in turns.”

Savings and Credit Cooperatives such as this one have been helpful in helping the ex-combatants rejoin their communities. Lakot says that the money has helped her pay school fees for her children, increase stock in her business, pay rent and feed her children.

Based on the success of the three-year project, other programs and projects to help ease former rebels back into their communities were started. The Transitional Demobilization and Reintegration Program (TDRP), for example, has provided continued support to ex-combatants and other vulnerable conflict-affected groups  in Northern Uganda and neighboring countries affected by the LRA conflict through skills training and other social services, especially for widowed women and those heading up households.

“Through the various learning activities we have carried out, we are even more convinced than before that support cannot stop after reintegration,” said Abderrahim Fraiji, manager of the TDRP. “The support to women’s associations builds upon the good results of the UgDRP and ensures that some of the gaps identified in the evaluations are addressed.”