Africa’s Growth Rate Ahead of Other Regions; but Growth Must Lead to Equality 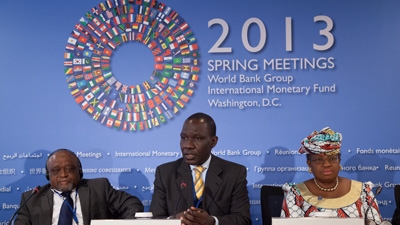 WASHINGTON, April 25, 2013—African Ministers of Finance, during a press briefing April 20th at the World Bank-IMF Spring Meetings, discussed Africa’s steady growth in the past decade, regional trade, and open borders.  The ministers emphasized the need for infrastructure development, energy, the creation of employment especially for youth, stressing the need to build Africa’s middle class in order to increase Africa’s consumer base, and appealed for more foreign investment to Africa.

The four ministers from Nigeria, the Union of Comoros, South Sudan and Cameroon also highlighted the challenge of ensuring economic growth leads to poverty reduction.

“We do not want growth that is not inclusive,” said Mrs. Ngozi Okonjo-Iweala, Nigeria’s Coordinating Minister of the Economy and Minister of Finance. “Our focus must be on improving the lives of those at the bottom rung of the ladder.”

Speaking on Africa’s economic performance, Minister Okonjo-Iweala said, “Africa has held a steady growth at 5 plus percent for a decade, has stabilized its macro, GDP growth is good, and inflation is in single digits.” She added that reserves are at almost five months of import coverage and steady.

Making reference to a presentation at the IMFC held the same morning, Minister Okonjo-Iweala said, “It was shown that low-income countries are the leading edge of growth and Africa is leading among these low-income countries.”  She added that, “FDI is improving, the private sector has more interest, and we have now provided a platform within which we can look at other challenges that we face within the continent.”

The Union of Comoros’ Vice President in charge of the Ministry of Finance, Economy, Budget, External Trade and Privatization Mr. Ali Soilihi said Comoros is focusing on upholding and maintaining the country’s unity after a period of chronic instability, marked by a separatist crisis.

On the brighter side, Minister Soilihi said, “Economic activity in the Comoros has picked up thanks to the sustained rise in activity levels in the construction industry, a very good harvest, the resilience of remittances from the Comoros’ diaspora, and significant internal contributions, and banking finance of the private sector.”

Cameroon’s Minister of Finance, Alamine Ousmane Mey, said that the 15 countries which make the CFA franc area are in macroeconomic situations which are basically similar, environmentally, after Cote d’Ivoire arrived at HIPC completion point.

In spite of the fact that the macroeconomic crisis persists, these countries have in the past months had a 6% growth rate, the Minister said.  “We have gone from 4.7 in 2011 to over 6% in 2012, a strong contrast to the situation that we find in developed countries and advanced economies, because the resiliency of our economies, through the diversification of our trade relations, has allowed us to get through this period of turbulence.”

Minister Mey went on to say that growth can only be sustainable if it includes young people who are trained through employment and if growth is shared by the population.

South Sudan’s Minister of Economic Planning Mr. Kosti Manibe Ngai, said South Sudan’s greatest challenge was the loss of 98 percent of government revenues after problems in the production and flow of oil beginning December 2011, at a time when 200,000 of its citizens arrived from Sudan, with nonexistent infrastructures and institutions which had to be built from the scratch.   The survival of the young Nation of South Sudan was therefore at risk.  Development indicators still remain very low.

“We pursued careful fiscal and monetary policies that stabilized the macro economy, protected core government functions, and catalyzed reforms as a result of those difficulties”, Minister Ngai said.  “We cut monthly expenditures by 50 percent compared to previous levels, managed to increase non-oil revenues by 226 percent over the past year, tightened fiscal controls and improved systems, thereby stabilizing the exchange rate and containing inflation at fairly reasonable levels.”

Going forward, Minister Ngai said that, with the prospect of resuming oil revenues per South Sudan’s agreement with Sudan, the country will pursue an accelerated fiscal and economic strategy with the goal to secure South Sudan’s economic independence.  South Sudan will also push ahead with reforms in financial management, natural resources, in the security sector, as well as in governance and in creating a conducive business environment.   Priorities include facilitating investment in agriculture, roads, petroleum, mining as well as energy.

The four Ministers on the panel acknowledged that Africa still is vulnerable to food crisis, global economic environment as in 2008/09 when Africa’s growth came down substantially during the global financial crisis.