TOGO: Changing the face of the town of Aneho 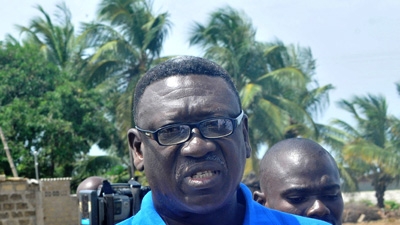 In Aneho, a Togolese town on the border with Benin, an ambitious urban development project has totally transformed the town. Three questions to Patrice Ayivi, the mayor of the town.

Aneho is the main town benefiting from the “corridor project” in terms of infrastructure. How will this project change the face of the town?

Patrice Ayivi: As part of this project, several construction programs are on the verge of completion. When the work is finished, a two-lane road with street lights will run through the town to the border with Benin. In the town, the small exit ramp (Adjido) from the bridge that connects to the Messan-Kondji intersection has been completely paved and will also be lit. In this part of the town, a system of culverts to dispose of storm water has been used to clean up the neighborhoods of Amadoté, Yésuvito, and Zongo, which are flooded every rainy season.

At Aneho, the construction of a second bridge has almost been completed. This work will resolve many of the problems that existed in the past.  A big truck only had to break down and the whole road would be blocked. At the border, the Sanvee-Condji bus station was completely renovated. It was paved, fitted with toilets, a check-point, and sheds to provide a rest area for travelers.

A commercial platform is being built to accommodate all the vendors who obstruct the roadway and those who sell bread to passing vehicles at the border. We used to have a lot of accidents─overladen vehicles used to turn over on to other vehicles or shops. This platform is therefore very useful.

The other major, long-standing problem was the parking of long-haul vehicles along the road near the border, which at times created very heavy congestion. As a result of the corridor project, a large parking lot is now being built at the entrance to the town, which can accommodate up to 200 trucks. Related infrastructures, such as toilets, are also being built at this location for users.

Do the residents of Aneho share your enthusiasm? Persons were displaced as result of the construction of the new road. How have you resolved the situation?

Patrice Ayivi: The social aspect was a priority and discussions were held with the community, a relatively new approach in our country. We welcome this approach by the World Bank and the Togolese Government, which ensured that the rights of the people affected by these major works were respected and that they could be relocated and compensated. It is true that this project caused some inconvenience to the people living along the roads. The need to address all these problems before the works started was a World Bank requirement. And in keeping with this, the municipality of Aneho partnered with the Directorate General of Public Works to jointly manage this social component. As a result, traders, seamstresses, and artisans who had their shops and workshops along the road were identified and compensated.

In the case of the houses that were demolished, a crisis unit was established and consultations held with displaced persons. The municipality proposed three locations and the residents themselves chose the site to which they would be relocated (just one km away from the old location). Equally important is the fact that this project really made people comforatble─if anyone looks at the old site and the new one, they will see a stark contrast. The World Bank required, for example, that their new houses be equipped with potable water and electricity.

Do you already feel the impacts of the project? If yes, in what way?

Patrice Ayivi: Aneho is a tourist town. This entire infrastructure is completely changing the face of the town! People who have not come to Aneho in two years would not recognize the town. We have already noticed a real excitement among the residents who have started to show a lot more interest in their town and in settling there. The price of land has increased considerably. Now, to buy a plot in Aneho, you have to spend between CFAF 2 and 3 million, while two years ago you could get a good plot of land for CFAF 1 or 1.5 million. This makes us very happy because the prosperity of a town is determined by the number of buildings and residents. Also, Aneho is a little closer to Lomé (the capital of Togo). With the improvement in the road along the corridor, it only takes 30 to 35 minutes to travel between the two towns. Aneho will therefore become a residential town because we are providing a more tranquil and less polluted environment.

It is up to us now to take advantage of Bank-financed infrastructure and create other hospitality facilities (hotels and commercial centers have already indicated to us their desire to set up here). Aneho will serve as a link between Lomé and Cotonou (the capital of Benin) and will emerge from the shadows. The contribution of the corridor project to the development of the town is therefore very significant!