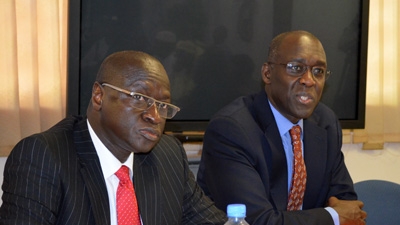 The Vice President of the World Bank for the Africa Region, Makhtar Diop, went to Mali on March 19. What was the outcome of his visit?

Ousmane Diagana : Makhtar Diop has been Vice President of the Africa Region since mid-2012, so he took office about three months after the start of the conflict in Mali.  Since then, he has always said that Mali, in particular, and the Sahel, in general, were his priorities. His visit therefore confirms this, in a context of the conflict not yet being fully resolved. During his visit, he had the opportunity to meet with the Malian authorities, starting with Dioncounda Traoré, Acting President of the Republic, Diango Cissoko, Prime Minister, and Tienan Coulibaly, Minister of Economy and Finance, as well as a number of other ministers. His visit also allowed him to interact with various Malian stakeholders, including those from civil society and the private sector, to understand the reality of the challenges that Mali is facing, but also to see that the country has real opportunities. That Mali has weathered the crisis confirms, in a way, that there is strong economic resilience. The Vice President reaffirmed the World Bank’s commitment to support Mali in three areas: (i) contribute to the development of adequate funding programs, both national and regional, (ii) generate knowledge to help the government develop and implement economic and sectoral policies, and (iii) mobilize other partners in supporting growth and development efforts.

Was the resumption of cooperation with Mali accompanied by a shift in the Bank’s support?

Ousmane Diagana : No, not inherently. Because there are real handicaps that Mali faces as a vast and widely desert landlocked country, with a very young population. The Bank has always worked to reduce structural deficits, and we will continue to do so. However, the conflict has created new challenges, both in the North and the South. In this context, we support Mali by way of specific programs that facilitate access to basic essential services by the most vulnerable of the population, especially those most affected by the conflict.  This is a priority within the current context.

Similarly, we know that this conflict has severely impacted the real economy, in particular the private sector, which contributes actively to the creation of national wealth. This is a priority area that will constitute an important pillar of our intervention in the country, in addition to structural issues that I mentioned above.

What is the Bank's strategy for Mali in the coming years?

Ousmane Diagana : Defining the scope of our interventions, whether they are in the form of programs, analytical studies or technical assistance is essential and must be done through a strategy. In the past, we were able to develop this strategy over a longer period of time, and through very thorough consultations because we had examined every aspect of the country. It is not possible this time, given the security conditions, but we still needed to retain the essentials. For this, we met with Malian stakeholders around a table to discuss the country's needs and understand how they perceive the Bank’s operations, how to get Bank support, and in which priority areas. The future strategy will reflect these discussions, even though it will be in the shorter term because, according to our vision, Mali will soon enter a transitional phase, with a period of restoring order in several areas. This strategy will be presented to our Board of Directors, on June 13, 2013, and will facilitate access to basic services in Mali. But do not forget that Mali had made a lot of progress in this area. One of our objectives is to consolidate these gains and to help build a solid foundation, essential for the country’s growth, economic stability and development.

In a post-conflict context, what are the prospects for the Malian economy?

Ousmane Diagana : Many thought that the Malian economy would collapse during this conflict. Initial estimates suggested a recession of about 3% in 2012, but it will ultimately be less. In 2013, according to our estimates, growth is expected to return to its trend level of 5%. This is the result of previous structural reforms in Mali and good management of public finances. In addition, favorable economic factors such as good harvests, rising gold prices and a good rainy season support this trend. However, we must not rest on our laurels, and the government must maintain structural reforms and ensure a real diversification of the economy, while investing in growth sectors such as agriculture. If Malians work towards this, with the support of development partners, then it will achieve a growth rate of 5%, which is relatively high in absolute terms, but not enough for a country whose population increases by 3.3% each year. This growth is not enough to reinvest in the economy. I am well aware that social reforms are not easy in a country like Mali, but Malians should bear these in mind.

What is the Bank’s response to the security challenges in the Sahel?

Ousmane Diagana : Mali’s location in the center of West Africa means that the events that happen there have an effect throughout the Sahel. Whatever has an impact in Mali necessarily affects other countries. It is evident that some factors of the conflict in Mali are endogenous, but other factors come from outside because of porous borders and the lack of opportunities for young people in this difficult geographical region that is the Sahel. Hence the importance of investing in national programs as well as in regional programs. As such, Makhtar Diop will rapidly present the initiatives to the Board to enable us to mobilize more resources directed towards sub-regional programs in the areas of agriculture, energy and infrastructure. This will also lead us to work more effectively with regional structures in the West African area, some of which have proved themselves in the past, including the Permanent Inter-State Committee for Drought Control in the Sahel (CILSS ) and the West African Economic and Monetary Union (WAEMU). The partnership between the Bank and these institutions should be strengthened so that regional programs are a better response to the challenges of development in this area.