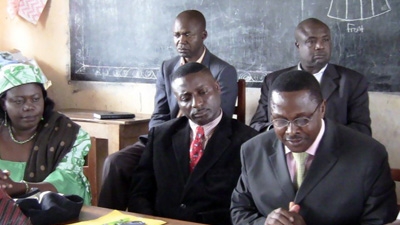 YAOUNDÉ, April 15, 2013–An ongoing initiative in Cameroon is helping to empower citizens and make their local governments, schools, and health centers accountable for better service delivery. Launched in 2010, the Budget Transparency Initiative (BTI) works with select local governments, schools, and health centers to simplify, analyze and disclose budget information to the population in the Adamawa and North West regions.

Aimed at informing citizens about the use of public funds, strengthening their participation in decisions on resource allocations at the local level, and at stimulating demand for transparency and accountability, this pilot initiative has yielded some important results.

For instance, filling out the simplified budget transparency template helped the government identify cases of mismanagement of funds at Tubah District hospital and recover over USD 20,000 of misappropriated fund at Government Bilingual High School Bafut, all in the North West Region.

With the creation of Budget Clubs in secondary schools, the Budget Transparency Initiative mobilized students to fight for greater transparency and accountability in the management of school affairs.  Described by the Director of the Government Technical High School Nkwen as “Service Users’ Financial Mentors”, these students defend the interest of all stakeholders in the school milieu (parents, teachers, staff and students, etc.) for improved performance.

For several reasons however, it was often challenging to bring local governments, schools, and health centers to disclose and discuss their budgets with community members. For one, a strong culture of accountability is missing in Cameroonian society according to the Governor of Adamawa Region Abakar Ahamat,. This is something he would like to change since being a public official entails an “obligation of transparency vis-à-vis citizens, vis-à-vis oneself, and vis-à-vis the state.”

That being said, after having published their budgets, officials often expressed a sense of relief.  As highlighted by Teukeu Leon, Head Teacher of the Government Primary School - Military Camp Bamenda, “this transparency in my budget brought me peace. Today, teachers know how many pieces of chalk I receive as part of the minimum package; so when these are shared, staff are conscious of the need to use these items [chalk, etc.] judiciously knowing that the quantity received has been exhausted in the distribution.”

That increased budget transparency can break this vicious circle is illustrated by the experience of Adamawa’s Ngaoundere III Council. Until 2010, farmers of this council had never paid the local cattle tax. However, after the council’s budget was made public under the Budget Transparency Initiative in 2012, the council was able to raise 763,400 CFA francs for the first time.

Experience from the Budget Transparency Initiative suggests there is considerable scope for greater transparency and participation of local communities in decisions about expenditures as well as in monitoring how projects are executed. While according to the law, locals council budgets are supposed to be available to all citizens, in practice access to budgets remains a challenge due to the costs of photocopying the documents as well as some public officials’ reluctance to hand out the requested information or their lack of awareness that it is their duty to do so. Even if available, budgets might still be incomprehensible to many citizens due to their bulkiness and technical nature. It is therefore critical that citizens are also provided simplified budget information that is easy to digest.

To spread the practice of simplifying and disseminating budget information more widely in Cameroon, recommendations based on the experience of implementing the Budget Transparency Initiative were shared with the relevant government ministries, and their incorporation into regular government operations is currently under review.