Technology is critical to disaster risk management, from high-tech meteorological agencies like Japan's (above) to the streets of Haiti, where online tools such as Ushahidi, Twitter, and Open Street Map connected people with vital information after the 2010 earthquake.

Otsuchi Town in Japan’s Iwate Prefecture was struck hard by the Great East Japan Earthquake and tsunami in March 2011. More than 800 people lost their lives, including the mayor, and 500 people remain missing. Vital information and communication technology (ICT) services were also interrupted, making it hard for citizens to carry on their daily business.

Two years later, Otsuchi Town is still recovering – and restoring ICT services is a priority. The municipality is trying to build resilience against future disasters, for instance by cooperating with the private sector to restore interrupted e-government services, leveraging cloud computing technologies.

This is just one example of Japan’s experience in using ICT for disaster risk management. On March 25, ministers and high-level policy makers from nine disaster-prone countries – Bangladesh, Chile, Indonesia, Myanmar, the Philippines, Sri Lanka, Thailand, Turkey, and Vietnam – and more than 150 participants from the Japanese government, disaster-related agencies, embassies, the private sector, academia, and civil society gathered in Tokyo to learn from Japan’s rich experience and discuss how it could be applied to disaster risk management in developing countries.

The symposium was hosted by the Japanese Ministry of Internal Affairs and Communications, the World Bank, and the Global Facility for Disaster Risk Reduction and Recovery (GFDRR).

While the Japanese experience is a reminder that no country is immune from the impacts of disasters, the statistics show that poor and vulnerable countries suffer the most. Since 1980, the economic costs of disasters in developing countries amounted to $1.2 trillion, equivalent to about a third of all official development aid. Over that same period, low-income countries accounted for only 9 percent of the total number of disasters, but 48 percent of the fatalities.

Opening the symposium, Japan State Secretary for Internal Affairs and Communications Masahiko Shibayama emphasized the critical role ICT plays in disaster management and the need to stimulate wider use of these tools in the developing world.

Chris Vein, senior manager of the World Bank's ICT sector, said, “The World Bank’s support is evolving to reflect new development challenges, and disaster risk management is becoming one of the key areas in which ICTs can make an exceptional impact.”

Myanmar’s Union Minister of Social Welfare, Relief and Resettlement, Dr. Daw Myat Myat Ohn Khin, emphasized that lessons from Japan will contribute to strengthening disaster preparedness in other nations, including in Myanmar, where the recent Thabeikkyin earthquake claimed 18 lives and affected more than 10,000 people. She identified geo-spatial and remote sensing technologies, along with modern ICT systems, as ways to strengthen disaster management planning.

Since the January 2010 earthquake in Port-au-Prince, Haiti, where tools such as Ushahidi, Twitter, and Open Street Map proved their efficacy, the power of technology for disaster risk management has been widely recognized. The Tokyo event highlighted technologies Japan leveraged in the aftermath of the Great East Japan Earthquake and tsunami, for instance:

The Japanese presented other advanced technologies for disaster risk management, including for early warning (such as J-alert - a nationwide automated early warning system); emergency response, data analysis and decision making (such as tsunami arrival time, flood level and risk analysis); and information sharing (such as mobile TV and satellite mobile phones).

" The World Bank’s support is evolving to reflect new development challenges, and disaster risk management is becoming one of the key areas in which ICTs can make an exceptional impact. "

Participants discussed how low-income countries with limited resources and skills capacity could take advantage of Japanese technologies. Some have been leveraged in countries like Indonesia, where an interesting example of local customization was presented: use of mosques’ speaker systems to disseminate early warnings information.

Other participants underlined the need to build awareness in communities through regular training and school education so that people can make informed decisions.

“Japan’s experience of the Great East Japan Earthquake and the lessons it learned can be beneficial in establishing a resilient society for all countries that suffer from natural disasters. And I think these experiences and knowledge should be shared with all,” Tanaka said.

Taniguchi emphasized the importance of not only hardware installation but also applications and services, starting with basic systems such as emergency drills. He also stressed the need for governments, the private sector, and civil society to work in partnership to effectively leverage the technologies and make the appropriate investments.

The meeting provided positive perspectives on how technologies can help strengthen countries’ disaster management plans and empower communities and individuals in disaster situations. 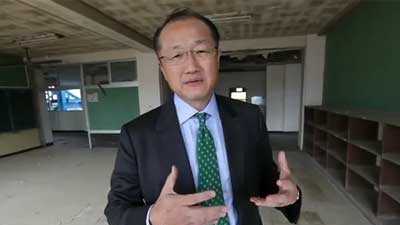