Getting Clean Water in Belarus

Safe and clean drinking water is The World Bank's priority. Today thousands Belarusians start their day with clean water, thanks to Water Supply and Sanitation Project.

Sharkovschina residents don't take clean water for granted. It's only been two years since fresh water started gushing from their taps instead of the dubious-looking brown liquid that sometimes ran, but mostly dripped, from ancient pipes.

The improvement comes thanks to a new water supply system that pumps clean water from two new, deep artesian wells and removes the iron that was turning the water brown. Before, many households used alternative sources of water, which were potentially contaminated. People often discarded water deemed undrinkable, resulting in a lot of wasted water and higher bills. And the dirty water clogged household appliances.

Belarus has an extensive network of piped water and sanitation, yet 15 percent of the population still lacks access to them. Eight percent of the country's water supply networks and 5 percent of the sewerage networks need replacing, and 227 wastewater treatment plants need repairs. Groundwater contamination is a hazard. Drinking water is of poor quality because of its high iron content.

The government is making it a priority to bring safe drinking water to people, and to build good wastewater treatment and sanitation facilities.

The regional center Gorodok is a good example of the impact of better water and sanitation. It has 14,000 residents and wastewater treatment facilities built in the 1950s. As a result of overloading and deterioration of some buildings and facilities, treated wastewater was of poor quality. Contaminated water was discharged through soil-reclamation canals into the Gorozhanka River and beyond, and into the system of lakes that feeds the Western Dvina River, which in turn flows into the Baltic Sea.

The dirty wastewater contained phosphorus and nitrogen compounds, which caused algae blooms and led to a gradual change in ponds and lakes, effectively slowly turning them into swamps. This process can be clearly observed in the coastal zone of the river Gorozhanka.

A new wastewater treatment plant doubles the treatment capacity and it will allow the city to treat all of its wastewater. While being more environmentally friendly, the new facility's electricity consumption has decreased considerably, from 50 to 18 thousand kWh per month.

Vasily N. Murenkov, Gorodok District Executive Committee Chair, says "Our district is rapidly developing, the majority of residents are young people. Our district is considered the cleanest in Belarus and we want to make sure that all the facilities in this pollution-free area of Vitebsk Oblast comply with environmental safeguards."

Polotsk, the oldest city in Belarus, has 21 water intake points which yield clean drinking water. But many residents of Borovukha-3 Township, just two kilometers from Polotsk, were unable to get clean water in their apartments and were forced to travel several kilometers to obtain water from friends or relatives. Now, the township's 3,500 residents no longer have this problem. Their houses are connected to a fully automated system supplying clean water.

This connection is one of many improvements in water and sanitation in Belarus funded with help from the World Bank since 2008. Others include construction or rehabilitation of underground water intake points, pumping stations, water supply networks, treated water reservoirs, as well as iron removal stations in eleven residential areas. In nine towns, deteriorated sewerage systems and wastewater treatment facilities are being replaced. Monitoring stations and small laboratories to test treated wastewater are being created. It is a small project, but its funds allow for prompt emergency actions to improve services.

Thanks to the project, several thousand Belarusians start their day with clean water and, when the project is completed, their numbers will increase to more than 300,000. 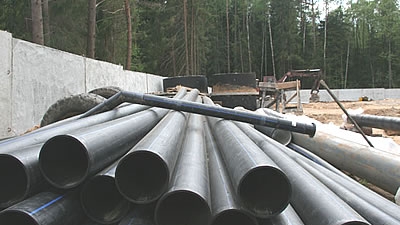 Photos: Getting Clean Water in Belarus