Effective Conservation in a Resource-Constrained World: Lessons from Africa

Ask any environment minister or park manager, and they will tell you that finding the financial resources to protect biodiversity has always been an uphill battle.

As the threats to biodiversity are mounting, the need for resources has become ever more urgent: Habitat loss and degradation, invasive species, and overexploitation of species – including through criminal activities such as poaching – are conspiring to render conservation increasingly difficult. Add to that the accelerating impacts of climate change, and the task at hand already seems sufficiently overwhelming. Global economic troubles have added an additional layer of complication, as governments the world over are tightening their purse strings and redefining their priorities.

In the meantime, biodiversity is in precipitous decline in all four corners of the globe: Extinction rates are between 100 and 1,000 times higher today than they were before humans walked the earth. Nearly 20,000 species are on the IUCN’s endangered species list; some 1,450 of those have been added in the two years since 2010 alone.

This is worrisome not only for the sake of nature, but also because conservation matters for development: Nature can be an important engine of green growth, whether by providing a livelihood basis for communities at the rural frontier, by feeding supply chains for business, or by fueling tourism.

Given the uncomfortable marriage of ever more scarce resources and ever more critical demand for them, it is vital to identify conservation measures that are effective in a resource-constrained world. Based on 10 years of World Bank experience in biodiversity conservation in Africa, a new report (pdf) outlines some approaches to meeting this challenge.

" The African continent is undergoing a fundamental transformation. We see biodiversity as an essential component of inclusive green growth, and are committed to strengthening our role as a leading supporter of African countries' conservation efforts. "

“The African continent is undergoing a fundamental transformation,” says Jamal Saghir, World Bank Director for Sustainable Development in the Africa Region. “We see biodiversity as an essential component of inclusive green growth, and are committed to strengthening our role as a leading supporter of African countries' conservation efforts.”

Landscape-level planning and management extends biodiversity conservation beyond protected areas, which can ever only cover a limited area. This approach integrates biodiversity considerations into agriculture and designates ecological corridors that build upon existing social and institutional arrangements.

In South Africa’s Cape Region – which boasts some of the highest plant diversity levels in the world – the government, with support from the World Bank, worked with farmers and municipalities to increase by 282 percent the area of highly threatened lowland ecosystems under conservation.

The decimation of species due to a recent dramatic increase in poaching has made headlines: Cameroon’s Bouba-Ndijida National Park, for example, lost 300 to 500 of Cameroon’s remaining 1,000 to 5,000 elephants between January and March of this year alone. South Africa is projected to lose 500 to 600 rhinoceroses this year, when as recently as 2007 that number was only 13. Organized criminal networks are responsible for much of the slaughter.

Among the fixes for this grave threat, three stand out: Increasing local law enforcement to stem the hemorrhage of species; increasing successful prosecution to ensure that crime doesn’t pay; and increasing cooperation between countries and across sectors to track trade routes and shut down smuggling rings.

“We really need more attention on environmental law enforcement to solve poaching. Over the long-term, this approach can cut the cost of conservation and contribute to getting at the root of the poaching epidemic,” says Lead Natural Resource Economist William Magrath.

Conservation funding needs to be structured for the long term, not only to address problems like poaching but to ensure that countries have predictable resources to manage their biodiversity. This will require mobilizing new funds and cutting the cost of conservation. New instruments, such as green bonds, will be key to this. The integration of conservation into projects such as tourism, infrastructure, climate change adaptation, and disaster risk management provides an avenue for conservationists to tap a broader array of financial resources.

Budgetary constraints are also one reason why an increasing focus is being accorded to partnerships with the private sector. In Zambia’s Kafue National Park, World Bank support to the park authorities led to private investors tripling available accommodations, such that tourism visits rose markedly and park revenues grew ten-fold within six years. Similarly, in South Africa’s Greater Addo Elephant National Park, a $5.5 million investment spurred $14.5 million in private sector investment and the creation of 614 jobs. In both cases, partnerships with businesses helped to improve conservation outcomes.

As threats to biodiversity grow, conservationists will increasingly have to turn to innovative strategies and sources of financing such as these. 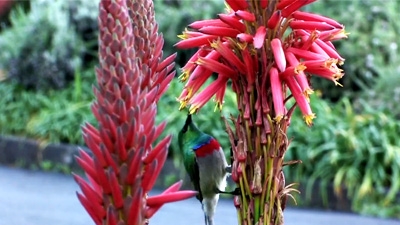 Into the Fynbos: Conserving Biodiversity in the Cape Floristic Region