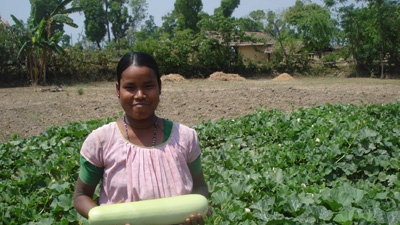 Five years ago, with the end of the decade-long armed conflict, Nepalis entered a new phase in the country’s history – politically and socially. However for the hundreds of thousands of Nepalis still living below the poverty line – the ones who were most exposed to the exploitation and abuse during the conflict period – inequality, discrimination, lack of basic services, all factors which contributed to the conflict, are still widely prevalent.

In this scenario, the Poverty Alleviation Fund, was designed to address the needs of the poorest and most excluded in society – by including the communities themselves in the development initiatives. The innovative use of direct financing to communities for multi-sector investments helped build community-level institutions and raise income levels. In a difficult post-conflict environment, PAF helps communities become self-reliant by letting them identify and manage their own needs and resources.

One out of every ten Nepali is directly benefiting from PAF programs. Reaching out to the most vulnerable groups, especially those who are disadvantaged due to gender, caste, ethnicity or physical isolation, PAF has demonstrated that even modest amounts of resources given to community led development initiatives can help many poor families get on a sustainable path out of poverty.

A comparison of a PAF beneficiary assessments conducted in 2004 and 2007 shows that average incomes for households in areas supported by PAF have increased over 80 percent in real terms, adjusted for inflation.

As a result of PAF, school enrolment rates among children aged 6-15 years increased by 11 percent on average and by 12-15 percent for households from older PAF assisted communities. The program has also helped increase access to services such as agriculture centers, community forest groups and farmer groups, and is positively supporting women’s empowerment. The IE shows that the relative impact of PAF on improving welfare is significantly higher, compared to other on-going poverty alleviation or government assistance programs for the same target group.

PAF has largely contributed to increase individual assets through income generating activities, such as livestock raising, plantations, and the creating of small agriculture business. PAF results are used to reach out to severely marginalized groups and to coordinate with programs such as food for work, education and skills training, and micro-hydro so that efforts being made through other programs can also reach the most marginalized as demonstrated by the PAF approach.

A grant agreement for the additional financing of PAF was signed between the World Bank and the Government of Nepal in July, 2011. Other Development Partners such as IFAD, Helvetas, GIZ are now working with PAF to strengthen synergies between programs. The Ministry of Local Development and PAF will coordinate on monitoring and planning to meet community demands. The program will continue to focus on helping communities diversify income generating activities and increase investments in infrastructure with special focus on improving food security in response to drought and price fluctuations, particularly for the most food insecure households.