The Gansu and Xinjiang Pastoral Development Project, launched in 2004 and completed in June 2010, assisted in the government’s efforts to improve the capacity of pastoral areas to support biodiversity and livestock and raise the living standards of the population living in those areas.

About 35,000 households or 140,000 people in Gansu and Xinjiang were primary beneficiaries of the project. And a total of about 120,000 households or 600,000 benefited from improved public sector services such as improved breeding stock, artificial insemination, veterinary and extension services. Many of the beneficiaries are ethnic minorities and women. The project was successful in halting and reversing degradation of pastures and in improving the productivity and quality of livestock in the areas covered.

China takes third place after Australia and Russia in grassland area. However, the grassland degradation in western China is very serious. Over the period from 1989 to 1998, the total area of degraded grassland almost doubled. Reasons for this degradation include increasing conversion of grassland to cultivation, overstocking and overgrazing, as well as high levels of poverty, poor management, and natural factors such as rodent and insect infestation.

Gansu and Xinjiang are major regions of grassland and livestock. They account for one quarter of the territory of China and 30 percent of the country’s wool production. They are also critical environmental areas, both listed as priority areas in the Biodiversity Review of China, because they contain many grassland endangered species.

Xinjiang and Gansu also has a concentration of the poor, together making up almost 15 percent of China's total poor. Widespread poverty inhibits livestock development as well as the capacity of the region to seize new economic opportunities.

The project was designed to support grassland resource management through establishing improved livestock production and marketing systems that would increase the income of herders and farmers in the project areas. By empowering farmer and herder households to better manage their grassland resources and improve forage and feed production on arable lands, the project aimed to help them increase their incomes through more efficient and quality focused livestock production – which should be sufficient to generate marketable surplus to improve living standards.

As women traditionally play a significant role in livestock production activities, they naturally constituted the majority of beneficiaries of the project. Women were encouraged to participate in the implementation of project activities, and specific training and capacity building activities were organized for them.

Between 2004 and mid-2010, the results achieved by the project include the following:

The Bank supported the project with a loan of US$66.27 million. In addition, the Bank contributed to the continuation of China's reform process towards a liberalized rural economy with strong, supportive market institutions. The research and policy studies analyzed the incentives and disincentives that influence how farmers and herders make management decisions regarding grassland use, which provided input for the policy and institutional reform in sustainable grassland resource management. The project piloted new, participatory approaches that seek to manage livestock in a manner that conserves biodiversity in the production landscape. Policy and institutional reform implementation support at county and township levels enabled biodiversity conservation by encouraging collaborative approaches across sectors, leading to the development of an integrated approach to grassland management by local institutions.

The Canadian International Development Agency (CIDA) provided support to the training activities of the project.

The household livestock operations have proven to be sustainable as they are financially attractive to individual farmers and herders, economically beneficial to society as whole and also environmentally sound.

For the veterinary, artificial insemination and breeding improvement services, both the central and local governments have committed substantial public resources to ensure their efficient operations and good maintenance.

Furthermore, the governments at various levels continue to support and promote the successful experiences of livestock production developed under the project. Both Gansu Province and Xinjiang Uygur Autonomous Region are currently formulating various domestic projects to upscale the good practices.

“In the last few years we have improved sheep breeding, changed to electric shearing, and adopted wool grading, sorting and packaging systems. The quality of wool has improved a lot, and the yield of clean wool has increased by five to eight percent. Now we can earn eight to ten yuan more from each sheep,” said An Xuelong and An Jinlin, herders in Gansu’s Sunan County. 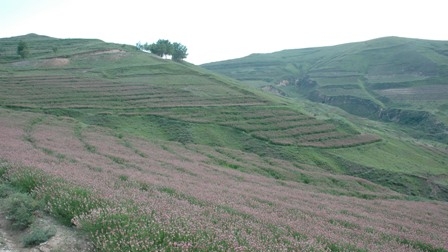