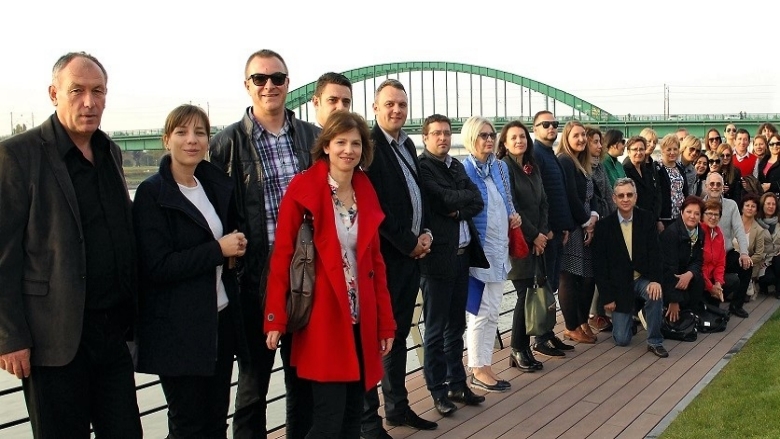 Urban Partnership Program: City to City Dialogue
October 24-25, 2016Belgrade
Organized in collaboration with the Standing Conference of Towns and Municipalities, Serbia, as part of the World Bank-Austria Urban Partnership Program, this event gathered participants from seven Western Balkan countries from the central and local government.

This two-day event was organized in collaboration with the Standing Conference of Towns and Municipalities, Serbia as part of the World Bank-Austria Urban Partnership Program (UPP) aimed to assist and support cities and local governments in South East Europe (SEE) in a process of modernization and reform, in order to promote local development for inclusive and sustainable growth, and enhanced urban governance.

The Program is targeted at South-East Europe, including Albania, Bosnia and Herzegovina, Croatia, Kosovo, Macedonia, Montenegro and Serbia.

The dialogue in Belgrade focused on findings from Municipal Finance Self-Assessment and Urban Audit: Sharing good practices and lessons learned.

UPP will continue with the C2C Dialogues as they proved to be successful way of gathering the Region around the table and discuss achievements as well as current issues. Main focus of the C2C is on problem solving through peer-to-peer knowledge exchange by bringing together different stakeholders to share workable strategies designed to foster local partnerships and more efficient, self-sufficient, and transparent governance.

On the first day, Mr. Ivan Bosnjak, State Secretary at the Serbian Ministry of Public Administration and Local Self Government provided opening remarks. Setting the tone for the dialogue Mr. Bosnjak stressed the need for capacity building of local authorities, as well as the need for professional exchange within the Region. He emphasized the importance of cooperation between national and local governments, since the reforms that are planned on national level are often causing challenges for local governments.

As a part of the Dialogue several panel and roundtable discussions showcased success stories from the Region:

City of Rijeka, Croatia: MFSA helped (i) identify problems with financial planning; (ii) develop the City Strategy; (iii) get a clear picture of whether the City can afford to assume their part of the participation in EU projects - it helped prioritize financially sustainable projects.

Municipality of Gjirokastra, Albania: MFSA was useful (i) in the context of territorial consolidation; (ii) instrument for bringing together the past, present and future financial situation; (iii) it encourages collaboration between different departments of the municipality, and (iv) can be used to communicate with central government, external partners such as Banks, as well as international donor community.

An urban planner from Berat, Albania reported that the Urban Audit process helps his municipality effectively balance three things: needs, wishes, and opportunities.  It identifies gaps in infrastructure and service provision, then engages with the MFSA data to generate a mid-term budgeting plan.

Roundtable with representatives from Ministry of Finance and Local Government Associations showed enthusiasm about the MFSA and the results achieved in their countries. The Ministry representative from Montenegro expressed high interest to see MFSA applied in all municipalities in Montenegro.

At the end of the Day 2 the study tour was organized and conducted by colleague from Urban Planning Institute in Belgrade. The tour aimed to show the differences that exist in urban development patterns in the city of Belgrade such a s historic vs modern, formal vs informal, public vs private; capital investments financed from different funding sources;  private real estate initiatives on large and small scale, as well as challenges of accommodating missing infrastructure in informally built areas.  The tour ended at the Sava promenade, recently opened public space which is going to be a part of Belgrade Waterfront development area.