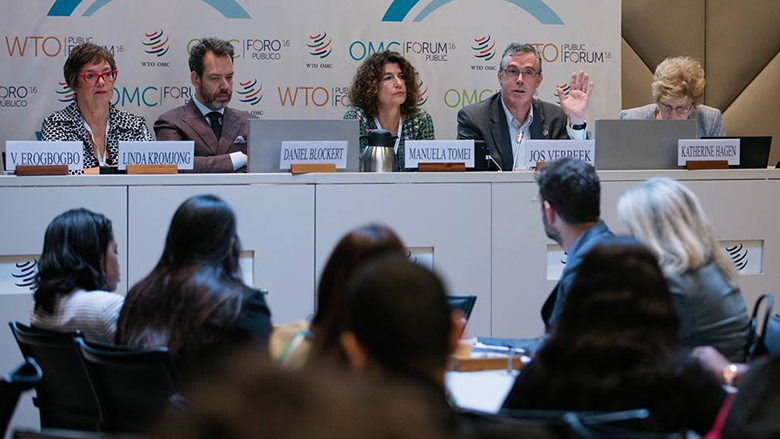 Senior Representative Verbeek highlighted that lack of disaggregated data is the main challenge to women accessing trade and more globally to SDG 5 and the 2030 Agenda. There is a pressing need for improved data to both monitor progress and help design the policies and programs that will be needed if the targets are to be met. He explained that poverty-fighting efforts have long been constrained by a lack of data in many countries. And they still are. The World Bank has identified 29 countries that had no poverty data from 2002 to 2011. Another 28 had just one survey that collected poverty data during that time. These gaps prevented analysts from identifying trends in how countries were making progress toward their goals, and posed a barrier to improving the lives of poor people.

More importantly, these gaps also prevented from incorporating a gender lens solutions to trade policy. The WBG, in partnership with UN agencies, foundations, clients, and others, is working to fill those gaps with rigorous data that will help address development challenges globally to ultimately replicate those success stories.

In addition, SR Verbeek pointed to the limited access to finance and ownership of land restrictions faced by women. There is a clear gender gap with regard to access to finance which significantly constrains women’s participation in trade-related activities, because these generally require capital. Having a bank account represents a vital step out of poverty and WBG/ IFC are committed to enabling 1 Billion new accountholders to be reached.

Finally, as final comments and relating to his own personal experience, SR Verbeek strongly emphasized the importance to have an established legal framework that will allow fathers to divide parental leave with mothers, to allow parents to share responsibilities.