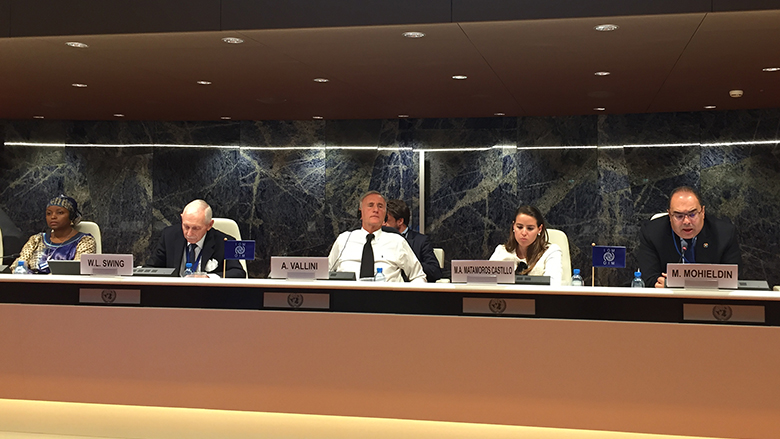 During the opening session, moderated by William Lacy Swing, Director General of IOM and titled “Migration in the SDGs- Where do we start and where should we go?” SVP Mr. Mohiledin shared some insights from the recent World Bank Group Migration and Development paper. He highlighted some areas that will need to be addressed to promote safe and orderly migration flows, including: (i) High remittances costs which can be easily lowered (ii) Illegal recruitment costs that should be stopped and legal pathways must be favored; (iii) Addressing and minimizing the push factors behind migration (iv) The net fiscal impact of migrants is positive, based on OECD numbers; (v) Remittance flows, despite their decrease represent $442 billion, or 0.8%, which is more than three times of the volume of larger than the volume of ODA. In addition, he also emphasized the importance to include municipalities and localities in this process. Finally, he concluded by emphasizing four takeaways from the report: The need for (i) More knowledge and data work; (ii) Knowledge-sharing and better communication using social media or entertainment education; (iii) Technical and financial assistance; (iv) A collaborative agenda, with programs such as twining.

The following speakers were also present:

During the closing session, titled “Financing the implementation of the migration-related targets”, moderated by Alexander Trepelkov, Director FFD, UNDESA, Mr. Verbeek highlighted that while many SDGs were related to migration and remittances, they should not be addressed in isolation from the other SDGs and required the same efforts in terms of financial mobilization.

He drew attention to the conclusions of the Third International FFD Conference which highlighted the importance to focus on “how” to finance the SDGs, versus “how much”. He also stressed that ODA alone which cannot finance the development Goals ought to be used in a smarter and in a catalytic way. He also pointed to the importance to better environments in which project are developed, including improving data availability of projects, standardizing contracts and documentation, understanding the regulatory and fiduciary constraints that asset managers face.

In his closing remarks, he stressed that migration must be addressed in partnerships with IOM and other international organizations. “We should not wait until 2029”.