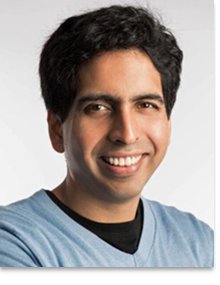 Salman “Sal” Khan is the founder and Chief Executive Officer of Khan Academy, a not-for-profit with the mission of providing a free, world-class education for anyone, anywhere. Khan Academy is a learning platform which includes instructional videos, practice exercises, dashboard analytics and teacher tools that empower learners in and outside of the classroom to study at their own pace. Khan Academy currently reaches over 37 million registered students in 190 countries, features a library of over 10,000 video lessons in more than 36 languages and covers a variety of subjects from math to science, history, economics, computer science and more. Khan holds three degrees from MIT and a MBA from Harvard Business School. Khan has been profiled by 60 Minutes, featured on the cover of Forbes Magazine, and recognized as one of TIME Magazine’s “100 Most Influential People in the World”. In late 2012, Khan released his book The One World Schoolhouse: Education Reimagined.

Salman “Sal” Khan will talk about how he founded the not-for-profit Khan Academy and how the organization is educating millions of people worldwide. Sal will also share his thoughts on what education reimagined could look like and how his dream of "providing a free, world-class education for anyone, anywhere" could become a reality.