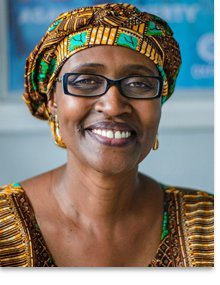 Winnie Byanyima is Executive Director of Oxfam International. Ms. Byanyima has been a leader on women’s rights, democratic governance and peace building, spanning the diplomatic, multilateral, legislative and civil society arenas. Born in Uganda, Ms. Byanyima was elected for three terms and served eleven years in the Ugandan Parliament. A world recognized expert on women's rights, she founded Forum for Women in Democracy (FOWODE), a leading NGO in Uganda and has served at the African Union Commission and at the United Nations Development Programme as Director of Gender and Development. Ms. Byanyima is a signatory to her country’s 1985 peace agreement and has helped to broker and support women’s participation in peace processes in several African countries. As part of her drive to bring women’s perspectives into core development issues, she co-founded the Global Gender and Climate Alliance and chaired UN-wide task forces on gender aspects of the Millennium Development Goals and climate change. Ms. Byanyima has served on numerous global boards and commissions and is currently a member of the Executive Board of the International Centre for Research on Women. She holds a M.Sc. in Mechanical Engineering in Energy Conservation and the Environment (University of Cranfield, UK), and a B.Sc. in Aeronautical Engineering (University of Manchester, UK).

According to Oxfam International, we live in a world where just 62 people own the same amount of wealth that is shared by 3.6 billion others. At the same time, we know that billions of people, half the planet, are responsible for just 10 percent of the carbon emissions that cause climate change, while the activities of the world’s richest 10 percent produce around half of the carbon emissions. Winnie Byanyima will argue that in order to meet the Sustainable Development Goals and the world’s climate targets set out in Paris, we need to pay attention to the destabilizing effect of extreme wealth as much as extreme poverty. This means accounting for the influence of extreme wealth on our political system and our economies.