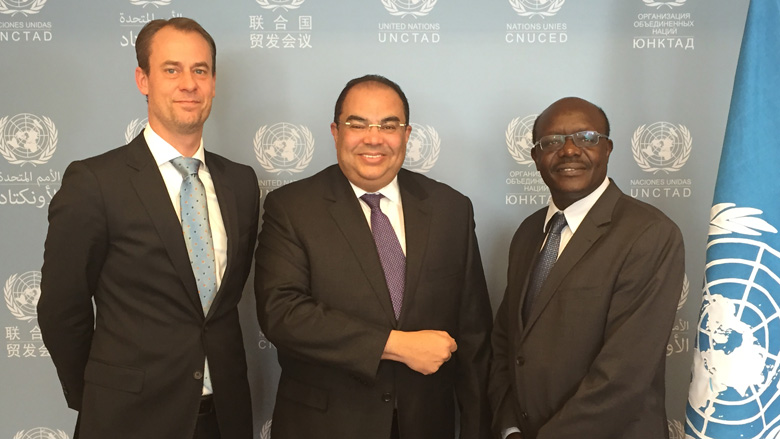 World Bank Group's (WBG) Senior Vice President for the 2030 Development Agenda, UN Relations and Partnerships, Mahmoud Mohieldin, visited Geneva to meet with counterparts from partner United Nations organizations and specialized agencies, including UN Office in Geneva, United Nations Conference on Trade and Development (UNCTAD), World Trade Organization (WTO), UN Office of the High Commissioner for Refugees (UNHCR) and United Nations Economic Commission for Europe (UNECE), and participated in several other engagements relevant to the Senior Vice Presidency’s mandate. He spoke at the UN Office in Geneva at an Executive Briefing to the Permanent Missions and representatives of the international organizations, sharing the WBG vision for the 2030 Agenda and how the WBG is helping countries in the implementation of the SDGs. Mr. Mohieldin shared that the SDGs continue to tackle the issues that the Millennium Development Goals (MDGs) attempted to solve, but they go further. They highlight a global partnership to end extreme poverty and protect the planet for the next generations, while leaving no one behind. What we see, he said, is that countries face the challenge of translating these ambitions into feasible strategies, with clear targets and specific policies based on country circumstances and initial conditions and national priorities. One of the major issues is managing financing and service delivery gaps at the country level and therefore identifying specific service delivery and financing solutions to close attainment gaps, will be crucial to meeting the SDGs. Mr. Mohieldin discussed that the World Bank is working on approaches and models to analyze progress on the MDGs to assess the ability of countries to achieve the new goals. Several case studies of a representative group of countries have been developed. A recent World Bank publication entitled "Trajectories for Sustainable Development Goals: Framework and Country Applications" provides more information. The participating representatives of the Permanent Missions and UN and other international organizations welcomed Mr. Mohieldin’s remarks and the World Bank Group’s appointment of a Senior Vice President to drive the 2030 Agenda. The World Bank Group Geneva Office will continue to bolster its relationships with the UN and other partners to support the Vice President’s mandate and looks forward to a fruitful 2016.