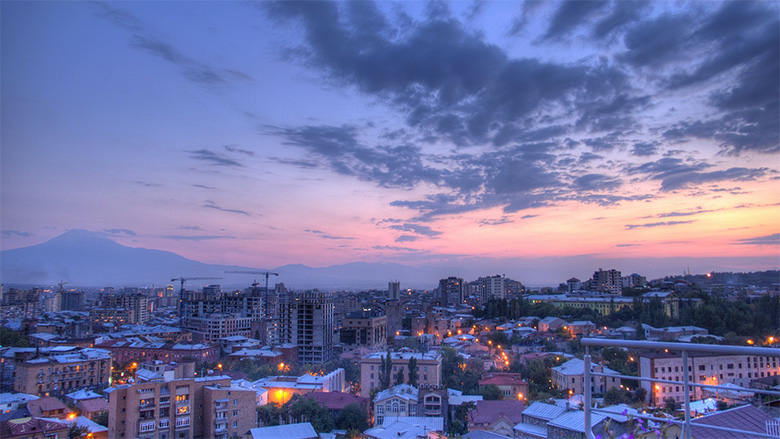 Armenia: Required Resilience to Natural Disasters in the Urbanization

Armenia lies in one of the most seismically active regions of the world and it has historically been prone to earthquakes, which gives a particularly high level of risk when considered together with high degree of urbanization across the country. One of the most devastating events that expressed this risk was the Spitak earthquake, which happened in December 7, 1988, affecting 40% of the country, leaving 514,000 people without shelter, injuring 20,000 and killing 25,000 people. A recent study of the World Bank reveals that on average Armenia annually suffers 3% of its GDP due to earthquakes.

Armenia also faces major risks from drought, hail and landslides and floods. Among these hazards, floods threaten half of the country’s territory, mainly in medium-altitude mountainous areas. The above study indicated that even a 25-year flood could affect 6 % or more of the country's GDP, and the potential government revenue losses and the public damage and losses could amount to approximately 10% of the General Government Total Revenues.

In this context, disaster risk management is increasingly recognized as an important aspect for country’s development. Since the Spitak earthquake, Armenia has learned its lessons and made significant improvements in strengthening its disaster response capacity, developing seismic zoning map, and upgrading its building codes. In order to further strengthen Armenia’s capacity on disaster risk management, the World Bank is launching the Armenia National Disaster Risk Management Program in cooperation with its development partners.

The Armenia National Disaster Risk Management Program (NDRMP) is aimed at supporting the Government of Armenia to further advance disaster resilience by:

The World Bank convened a half-day launch event with the objective of introducing the Program to the relevant stakeholders and the citizens of Armenia. The event that was attended by almost 50 people was moderated by Mr. Movses Poghosyan, Director of National Platform for Disaster Risk Reduction in Armenia. A number of ministries had their representatives during the event, such as Ministry of Territorial Administration and Emergency Situations, Education and Science, Urban Development, Finance, Economy and Health, as well as Armenia State Cadaster Committee and Municipality. Representatives of number of donor organizations, such as ADB, UNICEF, UNDP, OXFAM, OSCE, Armenia Red Cross, CARD, ORHUS Center in Gyumri, Habitat for Humanity Armenia branch, NGOs and associations were present.

In her speech Ms. Bailey, expressed sincere appreciation to the Government of Japan for its financial support through the “Japan-World Bank Program for Main-streaming Disaster Risk Management in Developing Countries” managed under the GFDRR and the readiness of the World Bank to collaborate with other donors and development partners in order to further advance and mainstream the disaster risk management agenda in sectoral development programs of Armenia. The World Bank has already started designing sectoral investment projects to be more disaster risk sensitive, e.g. the Bank-financed project on the Second Education Quality and Relevance Project developed prioritization criteria which were used to select the 17 high schools for assessment and subsequent seismic retrofitting.

H.E. Eiji Taguchi started his speech with noting the joint history of Japan and Armenia in fighting natural disasters and informed that the strong will of cooperation in this field was confirmed in the Joint Statement announced during the official visit of President of Armenia to Japan in June 2012. Japan has taken initiative and has contributed in promoting disaster risk reduction as one of the global agenda and had recently hosted the Third United Nations World Conference on DRR in March 2015 in Sendai city, during which the Sendai Framework for Disaster Risk Reduction 2015-2030 was adopted. The respective project was formed in the framework of “Japan - World Bank program for mainstreaming Disaster Risk Management in developing countries” financed by Japan, utilizing experience and expertise of relevant International Organizations, among them the results of the projects of Japan International Cooperation Agency (JICA) - “Earthquake Disaster Management plan for Yerevan” and “Landslide disaster management in the Republic of Armenia”. He expressed hope that this project would help Armenia to build disaster resilient society and further strengthen the friendship between the peoples of Japan and Armenia.

Being the National Coordinator for Sendai Action Plan in Armenia and Deputy Director of Armenia Rescue Service under the MoTAES, Mr. Nikolay Grigoryan started his speech with gratitude both to the Japanese Government for the continuing assistance in combating disaster risks and consequences, as well the World Bank for the launch of a very important initiative for Armenia. According to Mr. Grigoryan, Japan is a model country in fighting natural disasters. He also mentioned that the Program will facilitate the alignment of the National Strategy on Disaster Risk Management to the Sendai Framework and the objectives of the UN Sustainable Development Goals.

Mr. Armen Ghularyan, the Deputy Minister of the Urban Development welcomed everyone and emphasized the importance of disaster risk management and urban resilience projects for Armenia being an earthquake-prone zone and facing increasing levels of urbanization. The Ministry has been active in all the discussions and meetings the World Bank held in the field of disaster risk management and expressed the willingness to support and facilitate the ongoing and future undertakings.

On behalf of the Ministry of Education and Science, Mr. Qaramyan conveyed the significance of seismic safety in design of schools and retrofitting the already existing ones for the safety and security of Armenia’s younger generation and thanked the World Bank and the Japanese Government for their support and fruitful cooperation.

Concluding the event, Mr. Ko Takeuchi, Project Leader and Disaster Risk Management Specialist for Europe and Central Asia region, World Bank presented the participants a brief overview of the National Disaster Risk Management Program that aims to function as a platform where the results and outputs will be also shared with donors and development partners to mainstream disaster risk management and help Armenia make smarter and ‘disaster risk sensitive’ investment decisions.