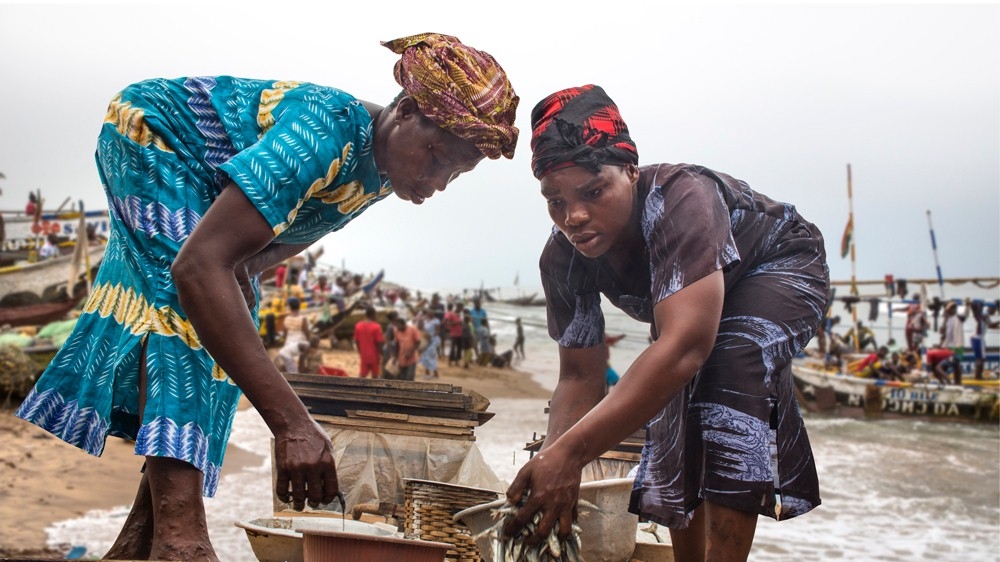 Improving Livelihoods and Creating Wealth through Sustainable Fisheries
April 16, 2015Washington D.C. (MC 2-800) and online
This event highlighted the role of the fisheries sector in the sustainable development of national economies, with a specific focus on the Africa Program for Fisheries and the need for better governance and transparency in the fisheries sector at a global level.

The world’s fisheries contribute significantly to reducing extreme poverty, building resilient communities, and fostering strong economies. One billion people in the developing world depend on fish as their primary source of protein. This number is expected to grow as the world population grows to over 9 billion by 2050. Fisheries, therefore, are a cornerstone of food and nutritional security, livelihoods, social safety nets, and jobs.

The panel discussion will highlight the crucial role of fisheries and aquaculture in ending extreme poverty and boosting shared prosperity in a sustainable manner. In Africa, fisheries provide a key social safety net and contribute to food and nutrition security as well as substantial employment opportunities. They are also a source of public revenues, trade and foreign exchange, including through foreign fishing arrangements. Furthermore, the scope for sustainable aquaculture growth in Africa is immense.

Through dynamic presentations and debate, the event will discuss the sector’s contribution to national economies, the importance of the private sector, and the crucial significance of transparency.

Diop has served as the World Bank's Vice President for Africa since May 2012.  Under his leadership, the World Bank Group committed a record-breaking $15.3 billion to Sub-Saharan Africa in FY2014 to help tackle development challenges such as increasing food security and agricultural productivity; improving access to affordable, reliable, and sustainable energy, creating economic opportunities for Africa’s youth; and responding quickly and effectively to emergency situations such as the recent Ebola epidemic.

Before taking up this position, Diop was World Bank Country Director for Brazil, based in Brasilia, between January 2009 and April 2012; he previously held the positions of Director of Strategy and Operations, and Sector Director for Finance, Private Sector and Infrastructure, both in the Latin America and the Caribbean Region. Between 2002 and 2005, Mr. Diop was the Bank’s Country Director for Kenya, Eritrea, and Somalia, based in Nairobi.

Before joining the World Bank, Mr. Diop worked at the International Monetary Fund, focusing on the Central African Republic. He also served as Minister of Economy and Finance of Senegal. In 2014, Jeune Afrique named him "one of the 50 most influential Africans." Follow him on Twitter: @Diop_WB

Prior to joining the World Bank in July 2014, Caballero was the Director for Economic, Social and Environmental Affairs in the Ministry of Foreign Affairs of Colombia. In this role, she managed the team responsible for formulating foreign policy on a broad range of sustainable development issues including climate change, biodiversity, land degradation, fisheries, agriculture and transboundary systems, working closely with a wide array of national and international counterparts.

She was a leading voice and negotiator in international fora, including the United Nations Framework Convention on Climate Change, and the Post 2015 framework. She was awarded a Zayed International Prize for the Environment in 2014 for her contribution to “environmental action leading to positive change.”

Earlier in her career, she served as Regional Technical Advisor in Natural Resource Management for Latin America & Caribbean at UNDP. She was also Assistant Executive Director for the Advisory Committee on Protection of the Sea (ACOPS), and has worked with academia, media, and the private sector.

A Colombian national, Caballero has a Master’s in International Relations (Transboundary Water Management) from the Pontificia Universidad Javeriana and a B.A. in Literature and Society from Brown University.

Lovei has been working at the World Bank since 1993. Early in her career in the Bank, she worked on investment projects, policy-based lending operations, studies, and technical assistance programs in several countries from Africa to Eastern Europe, East and Central Asia, and Latin America.

Adam was first appointed to the post of Minister for Foreign Affairs in June 2010. Prior to this, Adam was the Secretary of State in the Office of the President. Between 2006 and 2009, he served in the Office of the President as Director General Presidential Affairs and then Principal Secretary. He started his diplomatic career at the Ministry of Foreign Affairs as a Trainee Protocol Officer and later as Second Secretary.

In his portfolio as Minister for Foreign Affairs, Minister Adam’s vision was to further promote and safeguard the national interests of the Republic of Seychelles through an active diplomacy based on fostering good relations with regional and international partners and propelling the cause of Small Island States. In parallel with the Ministry’s vision, Minister Adam aspires to create a diplomatic platform that will allow Seychelles to have greater visibility and positive presence in the international arena.

In addition to his already vast experience as a public servant, Minister Adam has also represented Seychelles as a competitive swimmer at international level. Between January 2006 and January 2009, Minister Adam engaged in the teaching profession as a part time lecturer with the Manchester University and Seychelles Polytechnic Twinning Programme where he taught International Politics.  Mr. Adam is also Member of the Board of Trustees of the Seychelles University Foundation since 2007.

Prior to taking office as Mauritania’s Minister of Fisheries and Maritime Economy, Mr. Nani Ould Chrougha held various positions both academic and as a government official. After obtaining his PhD in Automatic Control from the University of Bordeaux, he taught as an Engineering professor at the University of Nouakchott and played an important role as an adviser to the rector regarding matters of education. He worked as the Director of Formation, Research and Technology Watch at the Secretary of State, and began the Prime Minister’s chief of Cabinet in 2007.

Eigen has worked in economic development and governance for several decades and has led initiatives for better global governance and the fight against corruption.

A lawyer by training, Eigen has worked as a World Bank manager of programs in Africa and Latin America; from 1983 to 1988, he was Programs Division Chief for Argentina, Chile, Peru, Ecuador, Paraguay and Uruguay. At that time Latin America suffered its greatest debt crisis and the responsibility of Eigen and his team included appropriate policy advice, project and structural adjustment financing. Thereafter, he was the Director of the Regional Mission for Eastern Africa of the World Bank. Under Ford Foundation sponsorship, he provided legal and technical assistance to the governments of Botswana and Namibia to strengthen the legal framework for mining investments.

In 1993, Eigen founded Transparency International (TI), a non-governmental organization promoting transparency and accountability in international development. From 1993 to 2005 he was Chair of TI and is now Chair of its Advisory Council. From 2005 to 2011, Eigen was the founding chairman of the Extractive Industries Transparency Initiative (EITI).

Eigen has taught law and political science at the universities of Frankfurt, Harvard, Johns Hopkins, Washington and Bruges College of Europe. Since 2007 Eigen is a member of Kofi Annan's Africa Progress Panel. He has been vice-chairman of the Management Board of the African Legal Support Facility at the African Development Bank and served on the Board of the Center for International Environmental Law (CIEL) in Washington.

Kulid has served as Director General since 2010, after one year as Assistant Director General. Kulild obtained a Master of Science in Economics and Business Administration from the Norwegian School of Economics and Business Administration in 1987. In addition, she has an undergraduate course in Comparative Politics from the University of Bergen. Kulild has a solid background from public administration. She was appointed Secretary General in the Norwegian Ministry of Petroleum and Energy and worked as Energy Counsellor at the Norwegian Embassy in Washington, from 1999 to 2001.

When the World Bank started a Community-Science Program to train local fishermen on monitoring illegal fishing activities, improve hygiene standard and knowledge of fishery management, Sayon became the project coordinator. He is dedicated and passionate about the work. He worked with local community volunteers closely to use the trawler spotter to identify illegal fishing activities of foreign fleet. The evidences they collected have served as proof in court to get fines from those illegal fishing vessels. He also worked hard with volunteers to prevent dynamite and chemical fishing within the communities. He has been a champion of fighting illegal fishing, but often receives threat because of that. When the World Bank project ended, he continued working with Environmental Justice Foundation to fight illegal fishing. As he said, he can sacrifice his life to protect the country’s marine resources.

Seck is a Senegalese environmentalist and activist for sustainable development. She has 25 years of experience in policy and advocacy for desertification and climate change through her work as adviser to Senegal’s President on sustainable development. She has supervised several projects and programs on desertification, food security and local development. She is the Founder and Director of Green Senegal, an NGO focusing on land degradation and resilience issues. She was President of CONGAD, Senegal’s Consortium of NGOS and President of the REPAOC Network (NGO platforms of West Africa and Central Africa).

She is now working on coastal defenses and on sustainable fisheries in areas highly threatened by climate change. Her recent work focuses on engaging communities on issues related coastal erosion, sustainable fisheries, higher quality of fisheries products and trade access, microfinance schemes for local fishing communities, and ecologic surveillance of the coasts to curb illegal fishing.

She has received numerous awards for her work on building the resilience of the communities from the United Nations Program for Development, OXFAM the Yves Rocher Foundation for Nature, and the US Congress. Following the Copenhagen climate summit she made proposals for Senegal to revise the environmental law to integrate climate change issues.