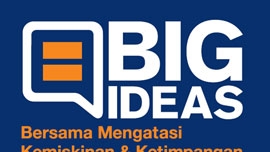 Tackling poverty and inequality will require the active involvement of not only the central government, but also local governments, think tanks, the private sector, as well as civil society. Thus, the World Bank is holding a high profile national-level conference entitled “Big Ideas: Bersama Mengatasi Kemiskinan & Ketimpangan” (addressing poverty and inequality together)  to bring together key individuals that are influential in shaping public opinion and public policy in Indonesia, as well as those that play an active role in defining the policy platform of the incoming administration.

The event will feature speeches from current and incoming government, and a World Bank diagnostic of Indonesia’s progress and the challenges that remain. The highlight of the event is a 90-minute talk-show style panel discussion between prominent Indonesians to debate and discuss possible innovations to address these challenges and what the incoming administration should prioritize moving forward. The speeches and talk show will be complemented with multimedia elements, consisting of video speeches recorded from an array of experts in development, both from Indonesia and abroad.