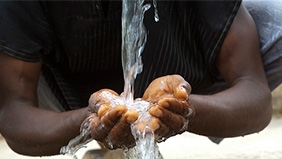 Opportunities in Aid-Funded Business in Water and Sanitation
June 19, 2014Liverpool, United Kingdom
PSLO for the UK Rupinder Nandra, based at UK Trade and Invest organized a conference on aid-funded business in the water and sanitation sectors for over 40 British companies. Panelists included representatives from international financial institutions, including the World Bank Group and the Inter-American Development Bank.

Globally 2.5 billion people live without access to improved sanitation: 1 billion of these people practice open defecation. Despite significant gains – almost 1.9 billion people gained access to toilets or latrines since 1990 – sanitation remains one of the most off-track Millennium Development Goals (MDG) globally. Only 64% of the world’s population has access to improved sanitation, but 70% of the Sub-Saharan Africa population and 59% of South Asia still lack access. At current rates of progress, the world will miss the MDG for sanitation by over half a billion people.

Sanitation lies at the root of many other development challenges, as poor sanitation impacts public health, education, and the environment. Without sanitation girls are more likely to drop out of school or are vulnerable to attacks while seeking privacy. Globally, poor sanitation leads to about 700,000 premature deaths annually. Recent analysis shows that ending open defecation can save children’s lives by reducing disease transmission, stunting, and under-nutrition, which are important for childhood cognitive development and future economic productivity.

Lack of sanitation also holds back economic growth. Poor sanitation costs billions to some countries, amounting to the equivalent of 6.3% of GDP in Bangladesh, 6.4% of GDP in India, 7.2% of GDP in Cambodia, 2.4% of GDP in Niger, and 3.9% of GDP in Pakistan annually. The economic losses are mainly driven by premature deaths, the cost of health care treatment, lost time and productivity seeking treatment, and finding access to sanitation facilities. Pollution resulting from improper disposal and treatment of wastewater and domestic fecal sludge also affects both water resources and ecosystems. At the same time, fecal sludge and wastewater and can provide valuable resources (water, nutrients, and energy) and economic opportunities, especially in urban areas and in water-scarce environments.