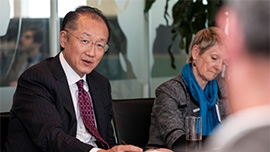 World Bank President Jim Yong Kim visited London on 7 May, where he met with key World Bank partners including Secretary of State Justine Greening, staff at the Department for International Development (DFID), MPs, civil society organizations and His Highness the Aga Khan. The visit was an opportunity for Dr Kim to give an update on the Bank’s strategic reforms, exchange views on important development issues and to identify new opportunities for collaboration.

Dr Kim opened his trip at DFID, where he spent the morning with Secretary of State Justine Greening and the department’s senior management. They explored how DFID and the World Bank can make the most of their considerable experience of joint working, increase the value of learning and tackle the challenges faced in eliminating extreme poverty. This was followed by a talk and energetic Q&A with over 100 DFID staff, with several DFID country offices joining by video link.

Dr Kim then moved on to Parliament to meet with the International Development Committee. The Committee’s long-standing Chair, Sir Malcolm Bruce MP and the Chair of the Parliamentary Network on the World Bank & IMF, Jeremy Lefroy MP, were among the several Committee members who attended.

The British Overseas Aid Group (BOAG) hosted a meeting between Dr Kim and the heads of some of the UK's largest international development charities to discuss the Post-2015 development framework, World Bank reform and the global movement to end extreme poverty, among other issues.

Concluding his visit, Dr Kim held his first meeting with His Highness the Aga Khan.