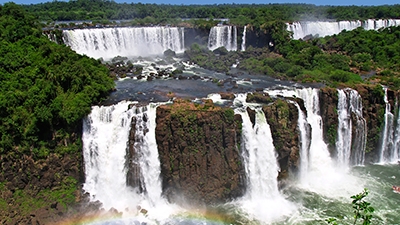 The World Bank´s Brazil Water Learning Series is a collection of four seminars aimed at sharing Brazil´s experience in its management, treatment, and use of its water resources. The series will begin with a contextual overview of Brazil’s recent history in relation to water management and then further explore the present, and future plans for water use in different sectors – irrigation, urban, rural use, etc.

Each seminar will be led by a renowned Brazilian expert and complemented by World Bank staff who has worked extensively in the country. The series will take place in the World Bank´s Brazil Country Office in Brasilia and available via livestream. The webinars will be interpreted simultaneously in English and in Spanish.

Note: Viewing sessions for World Bank clients and partners are taking place in Honduras, Argentina, Peru, Colombia, Mexico and any other Latin American country that expresses interest in the seminar.

If you have any questions, please contact Maria L. Madrid at mmadrid@worldbank.org.

Part one will introduce the topics, content and issues to be addressed in the four seminars; sketch the history of Brazil over the last fifty years—its  booming economy, rapid urbanization, and governmental system with a focus on the role and responsibilities of federal and state level institutions—and  provide a general overview of the water sector.

Part two will present the evolution of the institutional framework of the water sector; the principles of the National Water Resources Policy; the components of the National Water Resources Management (WRM) System at national, state and river basin levels; the role of Brazil’s National Water Agency (ANA), and major challenges. In addition, there will also be a focus on the planning, developing, distributing, and managing of water resources in the country. The speaker, Rosa Maria Formiga-Johnsson, will highlight the new perspectives for water governance and inter-institutional cooperation in Brazil, including the large metropolitan regions of São Paulo and Rio de Janeiro.

Seminar 2: Cutting-Edge Approaches to Water Supply and Sanitation in Brazil

Part one features a general introduction to the Water sector, including the Brazilian context, overview of the main aspects of the National WSS Law, the emergence & consolidation of WSS regulation, the National WSS Information System (SNIS), and the role of national funding and other funding mechanisms. Additionally, it includes an introduction to ABES and its annual utility management benchmarking and ranking system (PNQS) will be presented.

The second part focuses on Urban WSS Utilities, with an emphasis on:

All issues will be presented and discussed through a case study for the State of Minas Gerais Water and Wastewater Company (COPASA).

Seminar 3: Dams: Importance to Brazil, Society and the Water Sector

This seminar will focus on the role of dams to Brazil’s society and the water sector specifically. It will present the Brazilian Dam Safety legal and institutional framework, the progress made since the approval of the Dam Safety Policy Law in September 2010, and the challenges for implementing the Law and its instruments. Before 2010, there was no dam safety legislation in Brazil, at either the federal or state level. The Law 12.334 of September 20, 2010 is landmark legislation in the field of dam safety. It establishes the national dam safety policy, defines which dams are regulated, assigns legal responsibility for dam safety to the owner/ operator of the dam, creates the National Dam Safety Information System, and assigns regulatory authority to specific institutions.

Considering its continental landmass and divided powers between its state and federal governments, Brazil's experience in implementing said policy has been complex.  The discussion will present the importance of dams to Brazil’s society (i.e. water storage, flood control, hydropower, irrigation etc.), various aspects considered when formulating a dam safety policy, the lessons learned over the last three and a half years, and the challenges identified with policy implementation.

The final seminar of the 2014 Brazil Water Learning Series will incorporate the topics covered in the previous three seminars, and will provide a long-term view of the remaining challenges, e.g., technical, institutional, and so on, towards full integrated planning in the water sector.

The seminar will focus on the ever-increasing complexity of the water sector, its opportunities, and the difficulties to integrate across different water sub-sectors and environmental management activities. Several case studies will highlight concrete lessons learned on integrated planning and management, including: river basin transfers; inter-institutional coordination; integrated urban water management practices such as water pollution control, sewerage, drainage, urban/slum upgrading, land use, solid waste management; integrated planning between the water and energy sectors, or lack thereof.

The seminar will cover the impacts of climate change and the increasing water demand on the allocation of water resources among multiple users, impacts on water security and water risk management, management of increasing water use conflicts, the importance of multipurpose water infrastructure, flexible management, etc. Finally, the session will cover the evolution of the World Bank’s engagement in Brazil’s water sector for the last 40 years, from national single sector operations to national and subnational integrated approaches.

Boris E. Utria began his career at the World Bank in 1988. In August 2010 took over as Country Operations Advisor for the World Bank in Brazil. Among several other functions of his current position, he is responsible for managing the investment pipeline and portfolio of the World Bank in Brazil, managing the Country Office in Brasilia and is the Country Focal Point for South-South Cooperation and Gender Development in Brazil. Prior to assuming this position, Mr. Utria held various other senior positions at the World Bank, in the field and in Washington DC, including, Acting Country Director for Mozambique, Angola, Malawi, Zambia and Zimbabwe (AFMMZ), Acting Country Manager AFMMZ, Sector Leader for Sustainable Development for AFMMZ,  Leader of the Thematic Group on Energy and Poverty of the World Bank, Regional Program Manager for Renewable Energy for Africa (RPTES – a World Bank-DGIS Program,), and Senior Economist at the Energy Unit for Africa.

Before joining the Bank Mr. Utria worked as Senior Regional Planner at the Department of Regional Development of the Organization of American States (OAS) from 1982 to 1988.  Mr. Utria began his professional career as Research Associate at the Center for Technology PROMON (Rio de Janeiro), and has Masters Degrees in Agricultural Economics and Regional Planning from the University of Guelph, Canada, and a B.A. Honors in Economics from the Catholic University of Rio de Janeiro (PUC-RJ).

Mr. Abicalil, a Brazilian national, joined the Bank in 2007 as Senior Water and Sanitation Specialist. He has been working extensively in the Brazil water, sanitation and urban portfolios, leading several investment and policy development lending operations to federal, state and municipal institutions. He participated in the development of the joint World Bank and IFC Subnational Finance loans to subnational water and sanitation utilities, and has contributed to Bank financed projects and technical assistance in water and urban development in the Africa and Asia regions. He is also known for his expertise on issues such as subsidies, regulation and local economic development, and being a key participant in the country's sector dialogues.

Prior to his arrival at the World Bank, Mr. Abicalil worked as Senior Adviser for the Brazilian Association of State Water and Sanitation Utilities (AESBE) and as the coordinator of the Federal Water Sector Modernization Program, a program that combined TA at federal level and subnational levels and investments for 3 state utilities. Prior to those assignments, he was the senior advisor for the National Secretary for Urban Development. At the local government level, he worked for the Municipality of Angra dos Reis as Municipal Secretary for Works and Public Services leading the water supply and sanitation services. He has also worked at the IDB, UNDP and CEPAL in Brazil and in Uruguay, Mexico and India. His degrees are in Architecture and Urban Development from the Federal University of Rio de Janeiro.

Ms. Formiga-Johnsson graduated in Civil Engineering in 1987 from the Universidade Federal de Goiás. She obtained her Masters (1992) and Doctorate in Environmental Sciences from the Université de Paris XII, France.  Currently, she is an Adjunct Professor at the Universidade do Estado do Rio de Janeiro – UERJ (Department of Sanitation Engineering and the Environment) and the Director of the Water and Land Management at the Institute for the Environment (INEA) in Rio de Janeiro. Ms. Formiga-Johnsson has also been involved in the areas of policy, planning and water management, management of hydrographic basins, hydric resource economics, environmental management, land management, disaster risk management and climate global change/vulnerability and adaptation.

Ede Jorge Ijjász-Vasquez is the Director for Sustainable Development of the Latin America and Caribbean Region, covering the areas of infrastructure (transport, energy, water supply and sanitation, and other municipal services), environment and climate change, social development, agriculture and rural development, disaster risk management, and urban development. The Sustainable Development Department of the LAC region has a diversified active portfolio of about $17 billion.

Prior to this position, Mr. Ijjász was the Sector Manager of the Sustainable Development Unit for China and Mongolia and was located in Beijing, China.  Mr. Ijjasz was also the manager of the Water and Sanitation Program (WSP) and the Energy Sector Management Assistance Program (ESMAP). WSP and ESMAP are two of the longest-running global trust-funded trust fund partnership programs administered by the World Bank, supporting technical assistance and capacity building activities in the water, sanitation and energy sectors.

Earlier in his career at the World Bank, Mr. Ijjász was a Senior Water and Sanitation Specialist with the World Bank’s Europe and Central Asia region, and program team leader for water and sanitation projects in Central Asia, the Caucuses and the Russian Federation.

Mr. Ijjász is currently a lecturer with the Environmental Science and Policy Master’s Program of the Johns Hopkins University in contaminant fate and transport modeling and policy. While living in Beijing, he also taught a course in Sustainable Development at Tsinghua University in Beijing.

He holds a Ph.D. and a M.Sc. from the Massachusetts Institute of Technology (MIT) in civil and environmental engineering, with specialization in hydrology and water resources. He has several publications in civil engineering, physics and geomorphology scientific journals. His most recent book is on Sustainable Low-Carbon City Development in China.