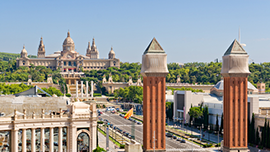 The Carbon Expo, which celebrated its 10th anniversary, was held in Barcelona from May 29 to 31, 2013. It brought together 220 speakers and close to 2,000 participants from more than 100 countries to address the climate change challenge.

The blog provides a synopsis of the three-day event that witnessed the release of a new report form the World Bank, Mapping Carbon Pricing Iniatitives, as well as the remarks from Christiana Figueres, executive secretary of the UN Framework Convention on Climate Change (UNFCCC). Read more

The Mapping Carbon Pricing Initiatives Report, which was launched at the Carbon Expo on May 29, maps existing and emerging carbon pricing initiatives around the world. Read more

This the official annual report of the World Bank's Carbon Finance unit and covers the carbon funds, facilities and financial instruments managed by the World
Bank during the period from January 1, 2012 through December 31, 2012. Read more

At the Carbon Expo, the World Bank and the Carbon Partnership Facility celebrated milestones reached by an energy efficiency street lighting program in Thailand and two methane reduction programs in the Philippines. Read more

In an opinion piece, World Bank's Vice President fo Sustainable Development, Rachel Kyte, writes, "A carbon price can be achieved through markets or taxes, and different instruments will be appropriate in different countries for different sectors of the economy." Read more

The Carbon Finance Unit supports more than 150 projects  and have reduced 177 million tons of carbon dioxide equivalent since 2000. Learn more