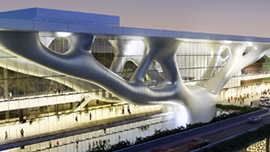 This page documents the World Bank's participation in a flurry of events at the two-week UN Climate Change conference, COP18, in Doha, Qatar.

The UN climate conference in Doha this past week kept the fight to combat global warming alive – 194 countries agreed to extend the Kyoto Protocol and to put in place a new agreement by 2015. The extension avoids a major setback in climate negotiations, but it does not fully reflect the urgency of the problems facing the warming planet. Read More

In an interview with Washington, DC-based National Public Radio (NPR), World Bank President Jim Yong Kim talks about Turn Down the Heat report, which predicts global temperatures could rise by 4 degree Centrigrade (7.2 degrees Fahrenheit) by the end of the century. Listen

In addition to significant development challenges, Yemen is particularly vulnerable to climate change. Apart from frequent flash-floods and droughts, climate change is impacting already scarce water supplies – making them even scarcer. Urban centers are under severe water constraints, and livelihoods of the large rural population, heavily dependent on agriculture, are also under threat. Read More

The Government of Qatar and the World Bank-led Global Gas Flaring Reduction (GGFR) partnership extended their cooperation to reduce flaring of gas associated with oil and gas production as a concrete contribution to improving energy efficiency and mitigating climate change. Read More

In her blog, World Bank Vice President for Sustainable Development, Rachel Kyte, writes, "when we look at the Middle East and North Africa, the challenges of climate change are evident. Farmers have been planting in drylands and dealing with climate variability and water shortages since the beginning of agriculture. They understand adaptation here, but no one is prepared for what we could face if the world doesn’t act to stop human-induced climate change now. Read More

According to a new report, Adaptation to a Changing Climate in the Arab Countries, extreme weather events are the new norm for the region. The consequences of the global phenomenon of climate change are especially acute in the Arab world. While the region has been adapting to changes in rainfall and temperature for thousands of years, the speed with which the climate is now changing has, in many cases, outstripped traditional coping mechanisms. Read More

In a video blog, Junaid Ahmad, Senior Director for Sustainable Development, Middle East and North Africa region of the World Bank says, "we may have to live in a 4 degree world and the leadership and people of the region are going to have to adapt even more consistently and even more sharply." Watch

UNDP and The World Bank are pleased to announce the release of the new version of the web’s number one resource for climate finance information. The Climate Finance Options (CFO) Platform is a one-stop shop for funding source information, case studies, publications, and analysis tools designed to assist all levels of decision making. The CFO Platform now also hosts a series of User Communities, where registered CFO Users can engage in collaborative discussion on topics within climate finance that they find most urgent and interesting. With over 60 funding source analyses, two dozen case studies, and hundreds of publications and tools, the CFO is the best source of information, especially for developing country decision makers. Register

For thousands of years, the people in Arab countries have coped with the challenges of climate variability by adapting their survival strategies to changes in rainfall and temperature. But over the next century this variability will increase and the climate of Arab countries will experience unprecedented extremes. Read More

This week, negotiators from nearly 200 countries have gathered at the UN Climate Conference in Doha to try to hammer out an agreement on a second commitment period of the Kyoto Protocol. Once again, the gathering of the parties to the Framework Convention on Climate Change highlights the lack of action on climate change, and the subsequent threat to the prosperity of millions. Climate change may roll back decades of development. Read More