Study - Listening to the Citizens of Uzbekistan 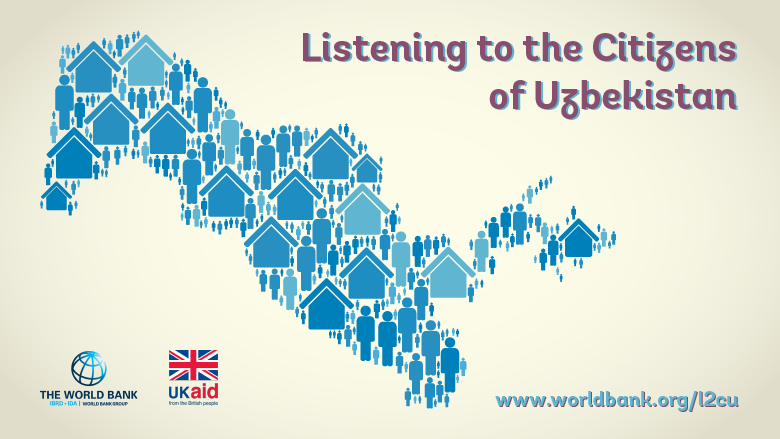 Over the past two years, Uzbekistan has embarked on ambitious social and economic reforms reaching every business and affecting every citizen. The potential benefits of reform are immense, but the process is challenging, with adjustment costs especially a concern for at-risk groups. From the outset of the reform process, the Government has called for continuous dialogue with citizens.

Listening to the Citizens of Uzbekistan (L2CU) is a system to comprehensively monitor the views and well-being of a representative group of people, as reforms are introduced. By reflecting the experience of this group over the course of a year, the study provides an up-to-date understanding of how abstract policies translate into impacts on the daily lives of people.

The study comprises of a 4,000-household nationally representative baseline survey, a monthly “panel” survey of a subset of 1,500 households from the baseline survey, and a qualitative data collection from key specialists and focus groups. The information collected in the L2CU initiative informs reform efforts directly by: 1) raising the profile of citizens' views, and 2) enabling in-depth economic analysis.

This webapge provides the public with ways to learn from the ongoing study, including an interactive data dashboard, information on methods/study design, summary details on results, presentation materials, discussion papers, and links to related information.

L2CU is a collaborative effort led by the World Bank and the Development Strategy Center. An advisory council made up of representatives of the State Statistical Committee, Ministries, and national think tanks provided advise on the study's design, and provided continuous assistance in the review and interpretation of results.

Questions about L2CU can be directed to William Seitz and Nina Kolybashkina.

Methodology of the Study

A working group comprised of national think tanks and the ministerial advisory council provided guidance on the design of the questionnaires, sample, and interpretation of the results.

The PSU for the L2CU baseline survey were mahallas, the lowest-level administrative unit in Uzbekistan. A total of 200 PSUs were randomly selected, proportionate to size, by World Bank staff using a full official list of mahallas provided by the National Mahalla Committee of Uzbekistan. The design closely followed protocols applied to Living Standards Measurement Study (LSMS) type surveys.

The national sample was stratified by region and by urban area. This data was cross-validated with data on “settlements” provided by the State Statistical Committee (SSC), which yielded a nearly exact match at the province level. All data collection efforts are carried out within the framework of the mahallas randomly selected in the first stage.

The administrative data collection approach was simple data entry from official mahalla records in selected PSUs. Each mahalla in Uzbekistan is legally obliged to maintain such records for every person and family residing in that location. This data covers the total population size, demographics, social protection programs, local amenities, and migrant populations.

Following the conclusion of the survey data collection fieldwork, the survey data design weights were adjusted on observed population totals in the administration records within the mahallas. These estimates were assumed to be more accurate as they had been updated within three months of the time of the survey fieldwork. Although not identical, there is a strong correlation between the descriptive statistics derived from the mahalla records, and those observed in the baseline survey data.

The second stage procedure was conducted using a simple random selection of households with equal probability within selected mahallas. A separate stratification level for households that receive social assistance was included, totaling 4 households per mahalla. The final target sample included 20 households per mahalla, 800 of which were social protection recipients by design.

The baseline survey included a full consumption and expenditure module using a list/recall approach. The resulting estimates are representative for 12 regions (referred to as provinces in Uzbekistan), 1 autonomous republic, and 1 independent city (Tashkent), crossed with their urban areas (except for the City of Tashkent, which is entirely urban).

After completion of the face-to-face baseline, interviewers began regularly calling a randomly selected panel of 1,503 households over the phone to conduct short interviews, following a set monthly schedule agreed to by the participating household.

The questionnaire for these phone interviews was designed to monitor trends in an expenditure of specific goods, migration, subjective well-being, measures of income, employment, service disruptions, and related indicators. Phone-based interviews began on September 5, 2018, and continue on a monthly basis. The target sample size for the panel component of the data collection is 18,000 household-level interviews.

Attrition is one potential concern using panel data of this type. To ensure that non-take-up in the first round (and attrition in subsequent rounds) did not seriously affect the required sample size for survey representativeness, households that refused to participate were replaced with other households drawn from the same sample cluster.

Attrition rates (or non-response rates) have tended to be low and stable across rounds of the L2CU panel survey, ranging from 1 to 3 percent, and 97 percent of the sample that completed the first round was still present in round four (note that it is possible for a replacement household to also be replaced). These results are particularly encouraging if compared to similar high-frequency surveys, in which attrition rates are generally higher (for example “Listening to LAC”).

Crisis and Recovery in Uzbekistan: Economic and Social Impacts of COVID-19
March 2021

Economic and Social Impacts of COVID-19: June 2020 update from Listening to the Citizens of Uzbekistan 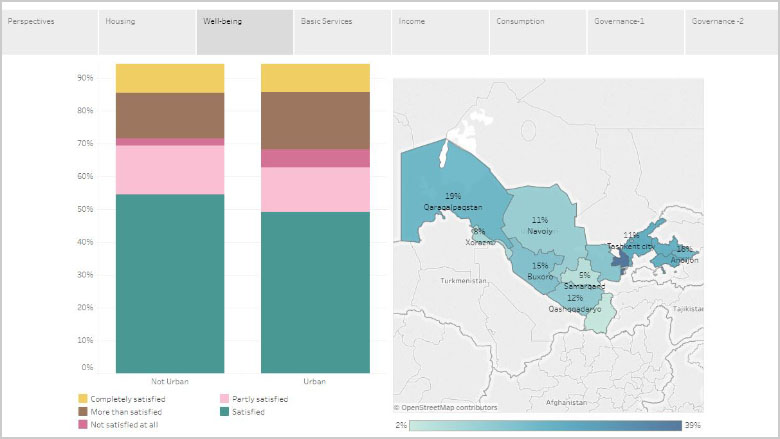