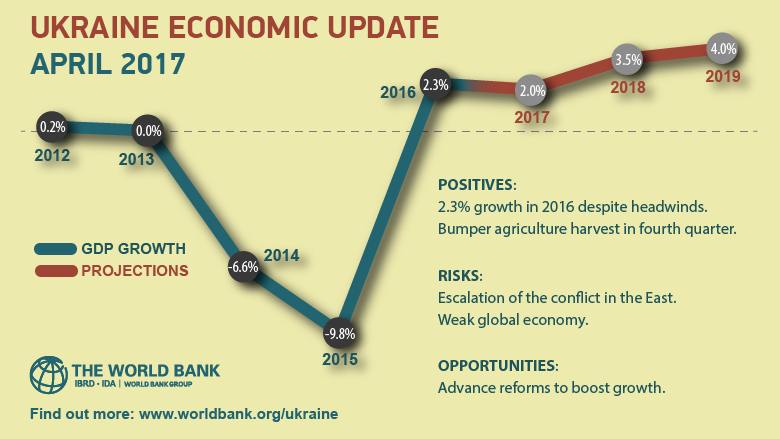 The economy recovered modestly by 2.3 percent in 2016, with a bumper agriculture harvest leading to stronger growth of 4.8 percent in the fourth quarter. Decisive reforms in the face of unprecedented shocks in 2014 and 2015 helped to stabilize confidence.

Other sectors experienced a pickup from low levels in 2016, with growth of 3.6 percent in manufacturing, 16.3 percent in construction, 4 percent in domestic trade, and 3 percent in transport. Fixed investment rebounded strongly by 20 percent from a low base, including manufacturing equipment and imported capital goods, pointing toward strengthening investor confidence. However, the overall pace of recovery remains modest as significant weaknesses remain in some parts of the services sector, including education, health, and financial services.

Stronger recovery has also been held back by weak external demand, and the continuing conflict in the East of Ukraine. While a number of important reforms have advanced in recent months, a further acceleration in reforms is needed to boost investor confidence and bolster economic recovery.

In 2016, real household incomes are estimated to have benefited from stabilization in consumer prices and the modest resumption of economic growth. Inflation slowed to 12.4 percent in 2016 from 43.3 percent at end-2015 due to exchange rate stabilization and prudent monetary policy, while real wages increased 11.6 percent (y-o-y) in December 2016. However, labor market conditions remained weak, with unemployment at 9.9 percent in the first three quarters of 2016.

The fiscal deficit increased in 2016 due to lower social security contributions, but the increase in the deficit was less than projected due to expenditure restraint and stronger performance of other tax revenues. The fiscal deficit (excluding Naftogaz) was 2.2 percent of GDP in 2016, up from 1.2 percent in 2015, but lower than previously projected.

On the other hand, other key tax revenues performed better than planned due to the pickup in economic activity in 2016. Revenues from value-added tax (VAT), personal income tax (PIT), and corporate income tax (CIT) increased by 7.6, 13.1, and 25.7 percent, respectively, in real terms. The authorities also implemented expenditure restraint measures in 2016.

Pensions spending declined 21.8 percent in real terms due to continued limited indexation (and advance payment of January 2016 pensions in December 2015), while spending on goods and services declined by 9 percent.

Capital expenditures increased due to greater resources at the local level through decentralization, while social assistance spending increased due to a further increase in coverage of the housing and utilities subsidies (HUS) program. The Naftogaz deficit was reduced to zero in 2016 from 1 percent in 2015. Public and guaranteed debt increased to 81 percent of GDP due to the recapitalization of PrivatBank in December 2016.

The outlook for economic growth remains modest due to significant external and internal headwinds, but renewed reform momentum could support higher growth going forward. Significant headwinds remain in accelerating reforms in a complex political environment. In addition, the conflict in the east of Ukraine has escalated since end-January 2017.

The coal and trade blockade with the uncontrolled areas in Donbas is expected to negatively impact two key sectors—steel production and electricity generation. On the positive side, there are encouraging signs of progress in a number of important reform areas.

The recovery should also benefit from improving terms of trade. Growth is projected at 2 in 2017 and 3.5 percent in 2018. This projection assumes no resolution in the trade blockade before the end of the year, with reduced exports of steel, disruptions in electricity generation, and diversification of coal supplies and higher exports of iron ore over time.

Growth of 4 percent or more in the medium term will require accelerating implementation of politically difficult reforms to address longstanding structural challenges. Reforms to boost private sector competitiveness, together with the real depreciation of recent years, should help support exports, while reforms to create fiscal space can unlock public investment, and reforms in the banking sector can permit a gradual resumption of lending.

The outlook is subject to risks, including an escalation of the conflict, further deterioration in the external environment, and difficulty to advance reforms in a complex political environment.

The fiscal outlook remains challenging—addressing macroeconomic vulnerabilities will require systematic fiscal consolidation underpinned by structural reforms. Despite a significant reduction in fiscal imbalances over the last two years, medium term fiscal pressures remain significant. In 2017, the fiscal deficit is projected to widen to 3.1 percent of GDP due to an increase in the minimum wage and the large deficit of the Pension fund.

Public and publicly guaranteed debt is projected to reach 89 percent of GDP in 2017. In order to address macroeconomic vulnerabilities and gradually reduce public debt, the fiscal framework targets a reduction of the deficit to 2 percent of GDP by 2020.

Achieving this target will require systematic fiscal consolidation anchored by reforms to the tax, pensions and social assistance systems. In addition, reforms are needed to improve the efficiency and effectiveness of health and education expenditures.

External vulnerabilities are expected to persist. Lower steel exports and higher coal imports due to the trade blockade are expected to further widen the current account deficit to 4.1 percent of GDP in 2017. Ukraine will require significant external financing to meet repayments on external debt of banks and corporates amounting about $7 billion per year during 2017-2019. Maintaining cooperation with the IMF and other official creditors will be important to meet external financing needs, bolster international reserves, and bolster investor confidence.

The launch event of the Ukraine Economic Update - April 2017 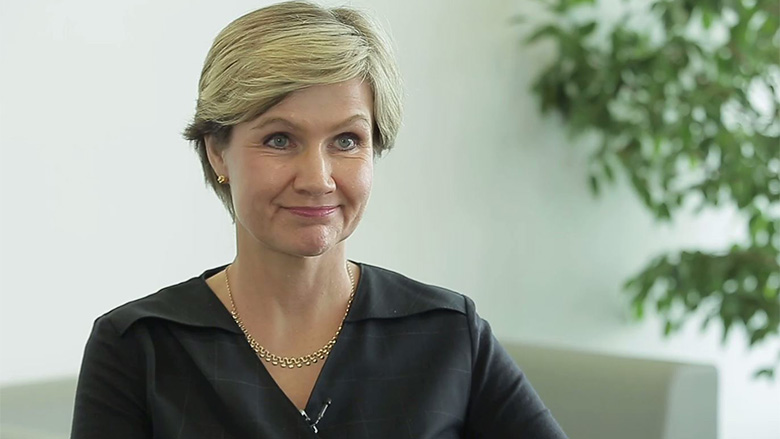 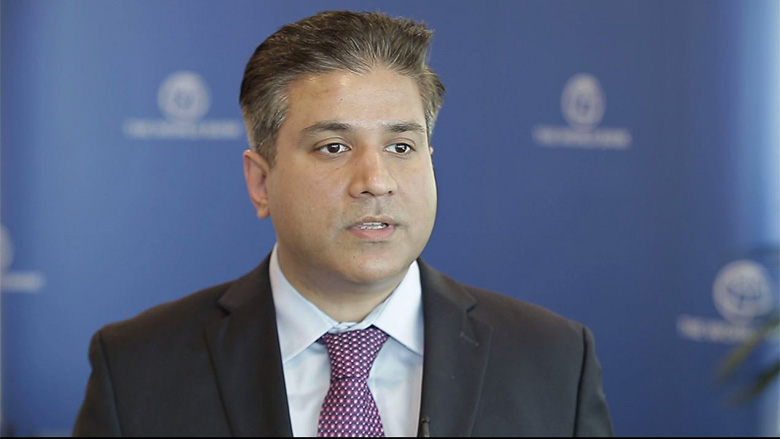 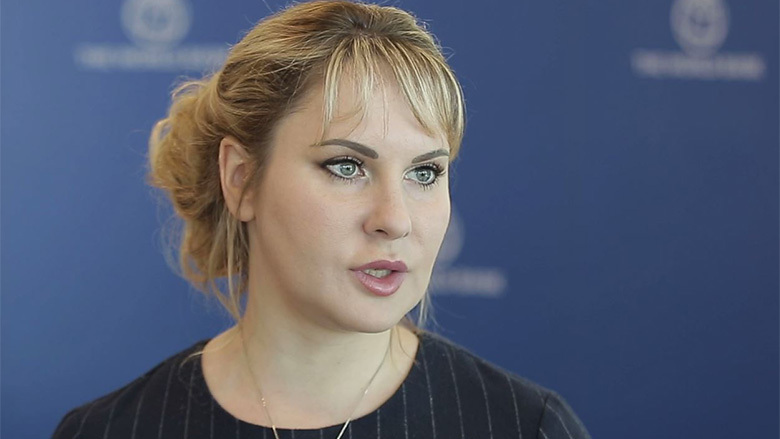