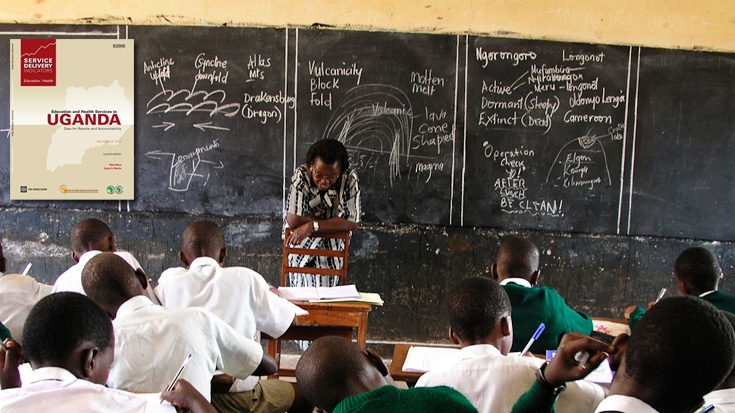 Kampala, November 19, 2013—Uganda has made strong progress in reducing child mortality and enrolling more children in school. Between 1989 and 2011, child mortality fell by half, and last year, 8.4 million children were enrolled in Ugandan primary schools. However, as new data show, the quality of health and education services has not kept pace with these achievements.

As a result, serious challenges remain, including ensuring that all primary-age children learn basic language and mathematics skills in school, and that mothers and infants have access to skilled health care, so that preventable illnesses and tragic losses of life are avoided.

Service Delivery Indicators (SDI), available for the first time for Uganda—and based on surveys of 5,300 teachers and health workers in 400 schools and 400 health facilities across the country—shed light on the precise gaps in service delivery that need urgent attention.

For example, only 40% of public primary classrooms had a teacher present and teaching at the time of the SDI survey. This was not just because of teachers being absent from school, but also because some teachers were at school but not actually in a classroom. Much of the absence was sanctioned, pointing to an issue that can be addressed and resolved by management.

Insights into what teachers and health workers know and do

Absenteeism is only one of several SDI indicators that provide more information on service delivery. The indicators fall into three categories: What teachers and health workers know (knowledge and ability), what they do (effort), and what they have to work with (the availability of key infrastructure, equipment, and materials).

In terms of knowledge, for instance, a key finding is that only 35% of public health workers could correctly diagnose at least four out of five common conditions such as malaria with anemia or diarrhea with dehydration. Also, just 19% of public teachers showed mastery of the curriculum they taught, identifying provider knowledge as a focus area for management.

On the effort front, the rate of absenteeism showed important regional inequalities. The average public primary 4 student in the Northern Region received only 50 actual days of teaching time during the school year, 90 days fewer than his or her Kampala counterpart.

“For Uganda to be able to move forward and claim the 21st century, transforming itself into a prosperous nation by 2040, all Ugandans must have access to the same high level of education and health care, and that basic issues standing in the way of better quality services need to be sorted out quickly,” said Waly Wane, Senior Economist, Human Development at the World Bank.

Wane is part of a larger effort to measure service delivery performance across Africa. The SDI are already available for Kenya, Tanzania, and Senegal; and will soon be available for Nigeria, Togo, and Mozambique. The vision is for these indicators to be repeated every two to three years, allowing governments and citizens to track the impact of reforms across time.

Data on the availability of infrastructure, equipment and materials

In terms of basic infrastructure and inputs, Uganda does relatively well. For example, 78% of public health facilities and 94% of public primary schools had basic equipment like thermometers and stethoscopes, or blackboards and chalk, respectively. However, serious problem areas included the availability of Uganda’s six essential drugs, and of textbooks.

An interesting SDI finding is that Uganda’s public schools do better on the availability of textbooks than Uganda’s private schools. About 14% of Primary 4 classes surveyed used textbooks during English and Mathematics classes—a low share, but much better than the equivalent private school classrooms, which had just 3%.

The indicators are spurring discussion among Ugandan policymakers, thought leaders, journalists, and citizens, adding to Uganda’s effort to promote accountability. The spirited panel discussion that accompanied the public launch of these key indicators can be viewed at www.livestream.com/worldbankafrica under “SDI Uganda.”

“The Ugandan government has set up institutions that foster accountability, such as the Budget Monitoring and Accountability Unit,” Wane said, “Further, the idea of accountability has taken strong root among Ugandans, including through efforts such as consumer scorecards for services such as health. The SDI is another important tool in their hands.”

“Education and health services tend to be sensitive issues, with a wide range of views and opinions in any country,” Martin says. “However, people everywhere agree that public money must deliver good results, and that’s really what the Service Delivery Indicators are intended to spur—changes and reforms that give taxpayers value for money.”