Agriculture: A Driver of Growth and Poverty Reduction 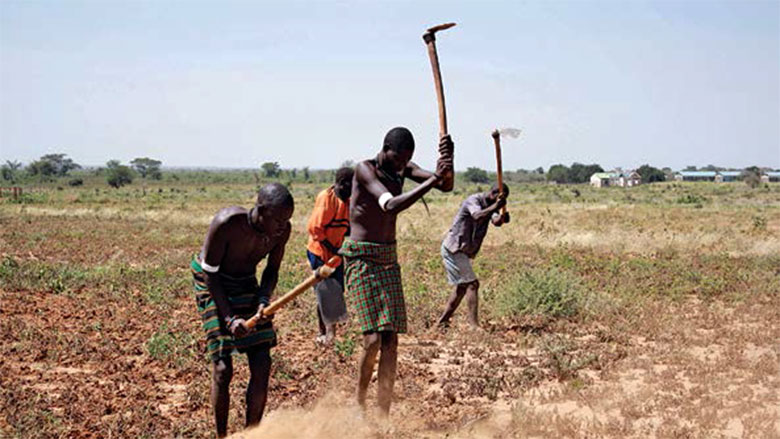 As the backbone of Uganda’s economy, agriculture has the potential to create lucrative livelihoods and lift thousands of Ugandans out of poverty, especially with the adoption of modern techniques and better quality inputs.

KAMPALA, September 20, 2016 – Uganda has made big strides in reducing poverty. Much of Uganda’s progress has been due to agricultural income growth, peace and stability, education, urbanization, as well as sustained economic growth averaging 7% annually.

According to a new poverty assessment conducted by the World Bank, the number of people in extreme poverty in Uganda (those living on less than $1.90 (2011 PPP) a day) has fallen from 53.2% in 2006, to 34.6% in 2013. This reduction of 2.7% per year is higher than the regional average of 0.74 over the course of the same period, making it one of the fastest percentage point reductions in extreme poverty in Sub-Saharan Africa and the developing world.

Poverty reduction among households working in agriculture accounts for 79% of the national poverty reduction observed between 2006 and 2013.  This underscores the important role the sector plays in creating lucrative livelihoods, especially given that it currently employs over 60% of the population. As the backbone of Uganda’s economy, the sector also contributes to over 70% of Uganda’s export earnings and provides the bulk of the raw materials for predominantly agro-based industries.

Almost two thirds of the agricultural income growth of households is attributable to high commodity prices (explained in part by sound policies) and favorable weather.  Nonetheless, it was not driven by the adoption of modern farming techniques and practices.

“The use of agricultural inputs remains low, despite the important gains they would represent for farmers,” explains Ruth Hill, senior economist and co-author of the report. “In 2012, only one in four farmers was using fertilizer for their crops, while only one in ten used pesticides. Similarly, less than 12% of farmers received extension services—all of which affect their yields.”

Low input use can be linked to the low quality of inputs prevalent in local markets—on average, 30% of nutrients are missing in fertilizers available to farmers in local markets. It is also be related to the fact that for technology adoption to pay off, it must be complemented by access to credit and access to markets.

Progress has also been made in some non-monetary dimensions of welfare such as child and infant mortality and access to potable water. However, the report emphasizes that access to adequate sanitation, electricity and other critical services remain elusive for many. For example, only a small fraction of households (14%) have adequate sanitation, half of the average in Sub-Saharan Africa, and only one in seven households use electricity for lighting, compared to one in three on average for the region. What’s more, one in three children are stunted, a sign of chronic malnutrition. Without improvements in these vital areas, Uganda’s progress is at risk.

Poverty reduction has been generally slower in eastern and northern Uganda, two regions which have undergone 20 years of civil conflict.  In 2006, approximately 61% of the poor lived in these two zones and by 2013, the number increased to 75%. Three out of ten people in northern Uganda don’t have adequate sanitation and access to electricity is practically nonexistent.

“Those possessing higher levels of education are more resilient to shocks and are more likely to diversify their activities beyond agriculture,” noted Clarence Tsimpo Nkengne, senior economist and co-author of the report.

In addition, high fertility rates have hindered poverty reduction in the country.  The increase in the dependency ratio of poor households from 1.38 in 2006 to 1.47 in 2013 held back poverty reduction by around 15 to 20%. While total fertility rates have been falling in Uganda (from 6.6 in 2005 and 5.9 in 2013), they remain high compared to the average in Sub-Saharan Africa (5.0 in 2013). Lower fertility rates can have a positive effect on household living standards and the participation of women in the economic development of the country.

Continuing the Fight Against Poverty

The report recommends several policy measures and actions that can help the country to sustain progress and achieve further poverty reduction.