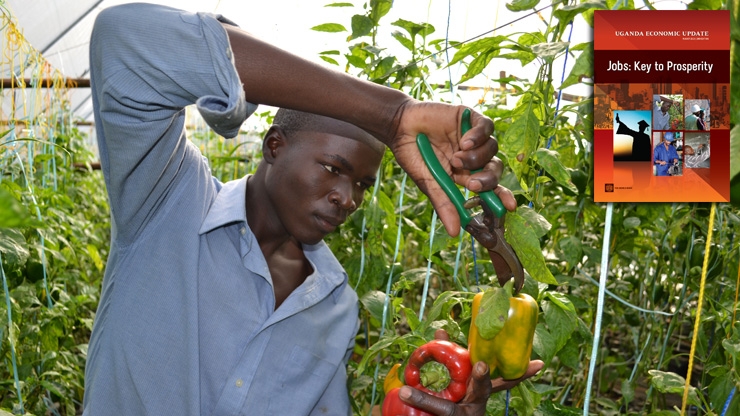 The second Uganda Economic Update focuses on the importance of jobs in the context of Uganda’s economic growth. As it is for other countries around the world, jobs are essential for Uganda’s development because they determine the living standards of individuals and households, support economic transformation, and promote social cohesion.

While Uganda’s economy has grown significantly over recent years and will continue to do so into the future, presently a significant proportion of the country’s population are not benefiting optimally from this growth. Rather, the vast majority of Uganda’s labor force remains employed in low productivity activities. This is largely because the most productive, rapidly expanding economic sectors are often more capital intensive than labor-intensive and employ only a small proportion of the workforce. In particular, the bulk of the population continues to work in the agricultural sector, often engaged in subsistence activities, with only a small proportion of agricultural workers engaged in the cultivation of high-value, commercialized crops. In the urban areas, a significant proportion of the population works in the informal sector, which faces particular constraints that prevent it from achieving high levels of productivity, including limited access to capital, limited support and recognition by the authorities, and limited access to workspaces and other facilities.

“With Uganda’s labor force growing above four percent per annum, Uganda can add 10 million potential workers into the labor market by 2020, adding to the challenge of creating goods jobs and achieving equitable growth,” says Rachel Sebudde, the Bank’s Senior Economist for Uganda, and the lead author of the report. “The challenge for Ugandan policy makers will be to manage the labor force's transition from a predominant involvement in low productivity subsistence agriculture to increased involvement in higher productivity manufacturing and services sector.”

Key messages and recommendations from the new report include: