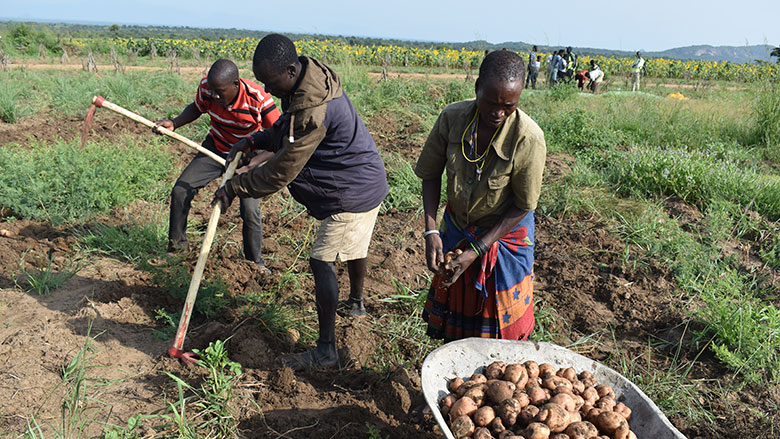 An innovative disaster financing facility under the Northern Uganda Social Action Fund has enabled pastoral communities in the semi-arid region of Karamoja, to grow crops to ensure food security and stave off the drought.

KAMPALA, February 13, 2020 - One in five Ugandans still live in extreme poverty and more than a third live on less than US$1.90 a day. Providing social safety nets to Uganda’s vulnerable citizens can support investments in human capital, reduce vulnerability to shocks and, thereby, help drive inclusive economic growth, according to the latest World Bank Economic analysis.

The 14th Uganda Economic Update, Strengthening Social Protection to Reduce Vulnerability and Promote Inclusive Growth, says social protection can help poor and vulnerable people cope with crises and shocks, find jobs, invest in the health and education of their children, and protect the elderly.

The Ugandan government has a National Social Protection Policy in place that is also integrated in the second National Development Plan (NDPII) which will end in September. But, the report notes, the coverage and design of national social protection programs are currently insufficient to meaningfully address the range and scope of vulnerabilities to shocks in Uganda. For example, two main programs, the Northern Uganda Social Action Fund (NUSAF3) financed by the World Bank and the Senior Citizen Grant (SCG), reach 3% of the population. According to the report, that number is very low compared to Kenya, where similar programs reach more than 6% of the population.

Government spending on the two major programs is also inadequate, according to the report. Spending amounts to about 0.14% of gross domestic product (GDP) in FY17/18, which is lower than Kenya and Rwanda who spend 0.4% and 0.3% of GDP, respectively on direct income support. A large part of spending on the SCG and NUSAF3 is provided by donor grants or concessional loans, which the report raises as a concern about the medium-to-long-term sustainability of financing to the sector. Uganda experienced strong economic growth in the 1990s and 2000s, but more recently there has been a slowdown with the economy growing at 6.1% in FY18/19 a slight fall from 6.2% in FY2017/18.

According to the Human Capital Index (HCI), a tool that measures the contribution of education and health towards the productivity of a country’s next generation of workers, Uganda is ranked among the countries in the lowest quartile of the HCI distribution, with an index slightly lower than the average for Sub-Saharan Africa region and below what would be predicted by its income level.

A child born in Uganda today will be only 38% as productive when she grows up as she could be if she enjoyed complete education and full health.

Aside from poverty, many households in Uganda remain vulnerable, mostly to income fluctuations, food insecurity, and climate-related shocks. They do not have the means to cope with shocks that they may experience. Droughts, irregular rains, serious illnesses, or accidents to the main income earners erode gains made in reducing poverty, but also sink households into further poverty.

“Most Ugandans work in agriculture – some 64% of the overall labor force and 72% of young Ugandans,” said Ramya Sundaram, World Bank Senior Economist in the Social Protection, Labor and Jobs Global Practice and co-author of the Update. “The agricultural sector continues to be highly exposed to climatic shocks. Hazards include floods, droughts, landslides, and most recently locusts. Having Adaptive Social Protection in place that can rapidly scale up in response to a shock is important so that one can respond quickly to emergencies.”

Considering the long-term benefits accruing from investing in children and for Uganda to benefit from its demographic dividend, the report notes that such programs are desirable and affordable when targeted appropriately. Simulations show, for example, that programs covering the poorest 50% of households with infants under two years old, would cost an estimated 0.23% of GDP, whereas similar programs covering the poorest 50% of all households with children under five years old would cost 0.50% of GDP.