Opening the Gates: How the port of Dar es Salaam Can Transform Tanzania 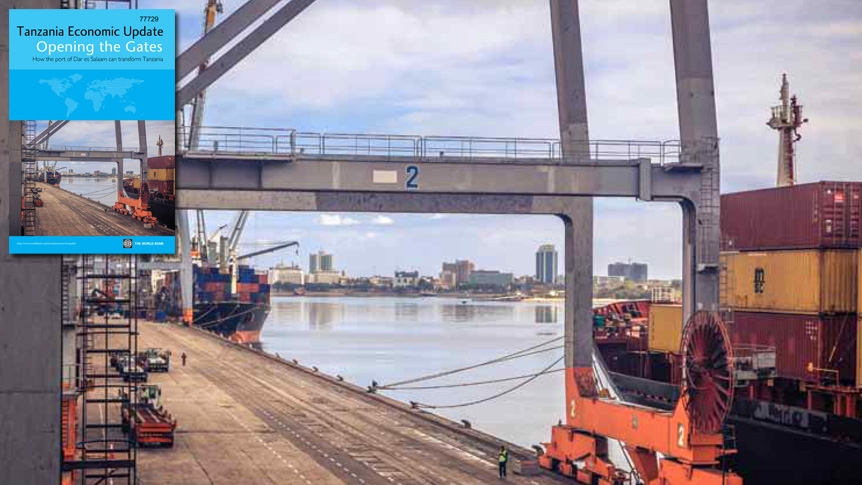 That would be a Dar es Salaam store owner pleading with an agitated customer over an item that just happens to be out of stock. It is the customer’s second, maybe third time, to be told this. (“Mama, give me just a little time, my new stock is still stuck at the Port but as soon as it comes out, I shall call you. Please bear with me; it will be within the coming week for sure!”)

This situation could happen with everything from popular brands of diapers, milk, and sanitary products to medicines and medical supplies, with shortages extending for several weeks or months. On the medical front, where the shortage could easily mean a life-or-death situation, hiring a courier becomes an option though not an automatic one for many ordinary patients.

The Tanzania Economic Update (TEU), a biannual series on the country’s economy, shows that container vessels transporting imported merchandise were on average queuing for 10 days to be able to berth at the Dar es Salaam Port. It could also take up to an additional 10 days to unload the merchandise, clear it and transport it. By comparison, container vessels at the Port of Mombasa, the largest in East Africa, took less than a day to berth in 2012, and three-to-four days to unload, clear and transport merchandise. The international standard is two days.

While officials at the Port of Mombasa charge simple flat rates, Dar es Salaam Port fees are based on the value of the merchandise, which could account for why fees are 74% higher in Dar es Salaam. According to the report, the cost of these inefficiencies translates into a tariff of 22% on container imports and about five percent on bulk imports, and financial losses for shippers and shipping companies.

“These costs are in general passed on to consumers,” said Jacques Morisset, lead economist for Tanzania, Uganda and Burundi and author of the report.

According to the report, an average household would save US$147 a year or 8.5% of total expenditures if the Dar es Salaam Port were as efficient as the Port of Mombasa.

Not only does the Dar es Salaam port provide a gateway for 90% of Tanzanian trade, it is also the access route to six landlocked countries including Malawi, Zambia, Burundi, Rwanda, and Uganda, as well as Eastern DRC. The TEU also highlights the costs to both domestic and international level stakeholders as a result of the port’s inefficiency:

Why Reforms are Imperative

The TEU identifies several causes of Port inefficiencies, including the failure to invest in appropriate infrastructure, corruption and those who benefit from it, a general lack of awareness of the costs by stakeholders and the unequal distribution of those costs.

Along with the KPMG audit firm, the World Bank conducted a survey of 100 mid-sized Tanzania businesses. Sixty-two percent of respondents said that Port ineffectiveness harmed their businesses slightly while 20% said it harmed them extremely.

Nevertheless, 39% of the firms also reported a sense of improvement in the port’s operations in 2013, which could be the result of some recent changes. The government has taken steps to make improvements, including management and personnel changes, providing higher tech equipment such as cranes and scanners, and implementing a banking system for all transactions.

The TEU refers to this “political appetite for change” as an opportunity to encourage government authorities to “design and implement strategies that effectively facilitate the increased volume of trade and its changing nature through the development of an investment plan which makes TPA fully operational.”

Unlike many reforms that cost a lot of money, the report highlights five cost-effective recommendations to increase Port performance. These include increasing consumer awareness of inefficiency costs, reducing corruption, motivating reformers and improving coordination.

With these actions, Tanzania could potentially accelerate its economic prospects to achieve additional revenues of up to US$1.8 billion (Sh2.93 trillion) per year, or a seven percent increase in its gross domestic product, while neighboring economies stand to gain US$830 million.