Tajikistan: A Moderate Slowdown in Economic Growth Coupled With a Sharp Decline in Household Purchasing Power 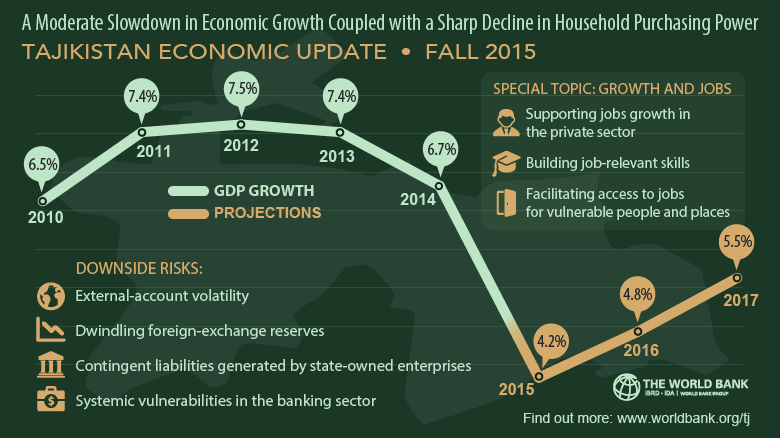 Tajikistan’s economy exceeded expectations during the first six months of 2015 despite a challenging external environment. According to official data, GDP growth slowed only moderately from 6.7 percent in the first half of 2014 to 6.4 percent year on year (y/y) in the first half of 2015, even as remittances from Russia fell, global demand weakened, and prices for the country’s key export commodities such as aluminum and cotton dropped significantly.

Domestic factors continued to drive growth, and both the construction and industrial sectors expanded as the economy’s focus shifted from consumption to investment. The state budget surplus reached 1 percent of GDP, and the external public debt to GDP ratio dropped to below 20 percent.

The sharp decline in remittances is limiting the growth of household consumption and could threaten the sustainability of recent gains in poverty reduction and shared prosperity. According to the National Bank of Tajikistan (NBT), remittances dropped by 32 percent (y/y), in US dollar terms during the first six months of 2015.

Although the decline was less dramatic (about 18 percent) in Tajikistan somoni terms, income losses were much larger than implied by GDP statistics. Falling remittances, limited employment creation outside the public sector, and rising prices are slowing the rate of poverty reduction. Moreover, the lack of well-targeted social programs leaves households vulnerable to economic shocks.

The government is shifting its policy stance to reflect the worsening external environment. The government is maintaining its commitment to fiscal discipline by setting clear spending priorities and postponing less urgent expenditures while protecting social outlays.

However, the delayed revision of the budget until November has both heightened the risk of arrears and created perverse incentives for tax authorities to exert excessive pressure on businesses in order to meet their revenue targets.

Monetary policy has been accommodative during the first six months of 2015, and rising inflation rates have prompted the NBT to defend the somoni through a combination of interventions and administrative controls, including ceilings on the exchange rates offered by foreign-exchange offices.

This policy has depleted the country’s already low stock of foreign reserves, which stood at just one month of imports in early July. The NBT has recently ceased its interventions and is gradually allowing the unification of the official exchange rate with both the cash and market rates. The NBT is also intensifying efforts to rebuild its reserves and improve their management.

The country’s economic outlook is broadly positive, but current forecasts are subject to significant downside risks.

The recession in Russia—combined with slowing growth among Tajikistan’s other major trading partners, including China, Kazakhstan and Turkey—is negatively impacting its short-term outlook.

After slowing to an estimated 4.2 percent for 2015 as a whole, GDP growth is projected to recover gradually over the medium term, though it is expected to remain below its recent historical average.

The current-account deficit is expected to improve moderately, narrowing from about 8 percent of GDP in 2014 to 6.3 percent in 2015 and remaining at around 6 percent thereafter.

While weakening GDP growth is slowing the pace of poverty reduction, the poverty rate is still projected to fall to 27.3 percent by 2017. 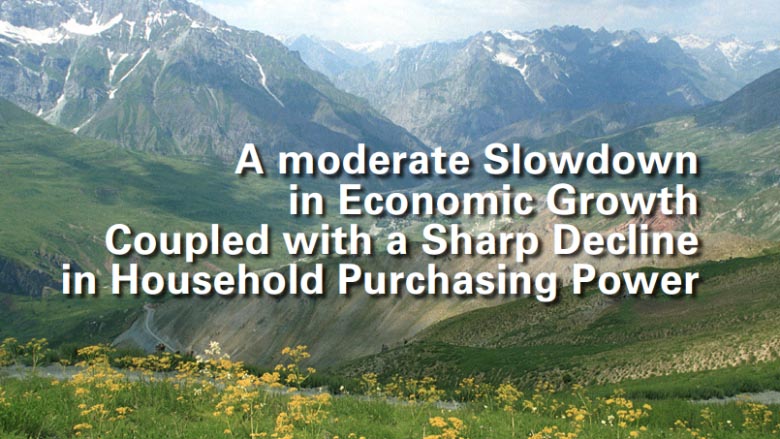