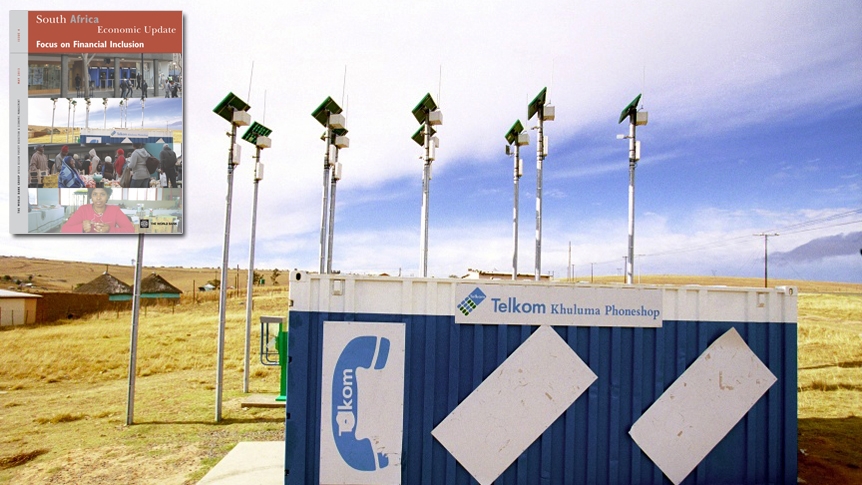 The South Africa Economic Update: Focus on Financial Inclusion (SAEU) provides an assessment of the country’s economic prospects and outlook, and an analysis of the challenges and opportunities of including millions of poor South Africans into the formal economy.

Asad Alam, World Bank Country Director for South Africa, said that focusing on financial inclusion is particularly important because of the positive impact it can have not only for individuals but for small businesses and the South African economy. There are 12 million adults in South Africa without an account at a bank or other financial institution, and millions more who have poor access to formal financial services.

“The transformative power of financial inclusion in South Africa should not be under estimated,” Alam said. “Improved access to finance by poor households and micro enterprises can unlock income earning opportunities and self-reliance for many.”

South Africa has one of the world’s highest unemployment rates, high poverty levels, endemic inequality and a dual economy characterized by an informal low-end economy existing alongside a developed, high-end economy.  Citing case studies from countries with comparable economies, the SAEU focuses on formal payments, savings and credit, and provides potential approaches the South African government might consider for enhancing financial inclusion and closing the economic gap.

The SAEU also notes that developments in information and communications technology (ICT) have made it possible to establish alternative virtual networks that can be used to deliver financial and other services at much lower cost. South Africa’s large mobile network operators and organized retail chains are well placed to perform this task, and technological advances such as the spread of cell phones, mobile banking and low-cost point of sale devices have created new cost effective delivery mechanisms of outreach.

However, there are challenges in financial inclusion, particularly the highly uneven access to and use of financial services and the concentrated ownership structure of the banking sector.

On an aggregate basis, access to financial services seems strong, but the aggregate picture masks significant inequalities in access. In part, financial inclusion reflects the duality of the South African economy with a world-class payment system that is not yet properly leveraged for financial inclusion.

“There could be high payoff from introducing a tiered licensing system that opens the market to institutions that can service unbanked and under banked individuals and small and microenterprises,” Fuchs said. For example, Kenya introduced a separate deposit-taking license for microfinance institutions in 2008. As of February 2013, eight microfinance institutions were licensed to take deposits from the general public.

Despite the challenges, the report suggests that a multi-pronged and concerted effort toward financial inclusion is required to make significant inroads to harness the comparative advantages of the developed economy for the benefit of the poor.