Searching for a New Silver Age in Russia: The Drivers and Impacts of Population Aging 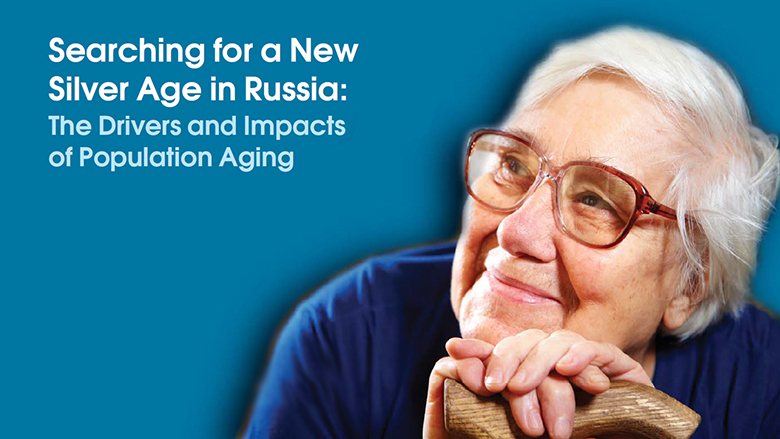 A comprehensive agenda on population aging in Russia would encompass three interrelated policy areas aimed at healthy, active, and prosperous aging. It could also include policies aimed at slowing down population aging by raising fertility rates and/or encouraging net migration. This report examines the past and future demographic changes in Russia, the possible macroeconomic impacts of aging, and the potential compensating forces of higher labor force participation and productivity, better health and adult education, and more comprehensive family policies.

Download the report: Searching for a New Silver Age in Russia: The Drivers and Impacts of Population Aging

Over the next few decades, Russia’s population is expected to age significantly. Some of this aging will be due to the increasing life expectancy, which is a significant achievement. However, this trend, together with low fertility and the retirement of large numbers of people born in the 1950s are expected to reduce the working-age population by as much as 14 percent over the next 35 years.

A decline in Russia’s working-age population will certainly pose serious social and economic challenges – but it can also offer important opportunities.

Pessimistic forecasts about the impacts of aging often assume that current behavior and institutions will continue unchanged in a future, older society. For example, since the early 1990s, increases in the working-age population have accounted for about one third of the growth in per capita GDP. Over the next few decades, without changes in individual behavior and government policies, a rise in the dependency ratio could reduce growth by 2 percentage points per year.

One important channel is savings, which could plunge if lifecycle-based savings rates remain unchanged as Russia’s population ages. Aging could also substantially increase spending on health care and pensions, leading to protracted deficits that boost today’s debt-to-GDP ratio of 20% of GDP to over 100% by 2050.

A more optimistic view is that individuals and firms will adapt to aging, and that policies can promote and speed up this adaptation process. Adjustments to policies and behavior could markedly reduce the impact of aging on savings, labor force participation, growth, fiscal accounts, and the incidence of disease. Individuals who expect to live longer could save more and work longer, in anticipation of a longer retirement.

If Russia’s relatively low retirement age is increased, it would encourage longer working lives and reduce the fiscal burden of pensions. The government can play a role here by encouraging firms to introduce age-appropriate management policies and by vigorously enforcing bans on age discrimination.

In addition, preventive services coupled with a marked reduction in smoking, excessive alcohol consumption, and poor diet could vastly improve the health status of the elderly – lengthening their contribution to the labor market and raising their productivity.

But there is no time to lose: without adequate adjustments of policies and behaviors, an aging population could impair national growth and fiscal sustainability, and some policies take time to have an impact, while others become more costly and politically difficult to implement as elderly dependency ratio rises.

Population aging is neither an uncontrollable disaster nor a problem that will solve itself. Aging can be consistent with longer, more prosperous, and more satisfying lives, but that is not inevitable. Changes in individual and firm behavior in response to market forces are necessary to address the challenges of aging. However, only the government can modify the structure of incentives and institutions to encourage longer working lives, higher fertility, and improved productivity. It is hoped that the Russian government will undertake the difficult reforms that are necessary to achieve these goals.

Many of the policies required to confront the challenges of aging – such as reducing Russia’s high rates of cardiovascular disease and cancer, providing adult workers with the education they need to succeed in a globalized economy, and supporting gender equality to improve the trade-offs that women face between work and having a family – would ultimately improve the economic and physical well-being of Russian citizens, young and old.

State of Adult Education in Russia: Ensuring that Older Workers Can Acquire Skills for the Future