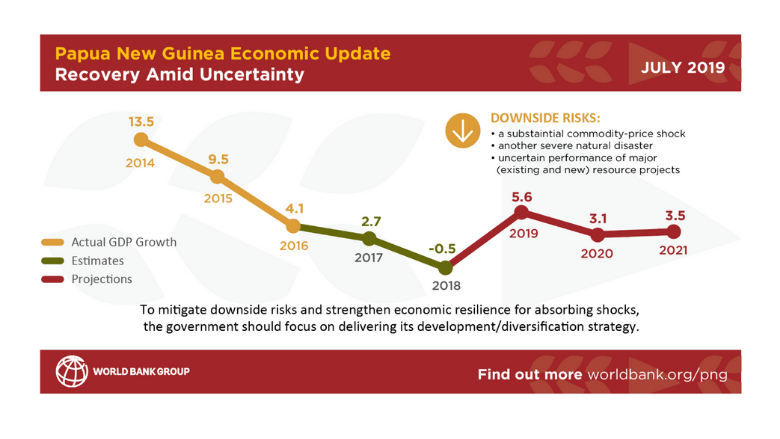 Papua New Guinea’s economy has started recovering from a series of external shocks, but its growth outlook remains fragile due to rising uncertainties

The recovery is being observed in the resource sector, mainly in its extractive segment dominated by liquefied natural gas (LNG), while growth in the non-resource economy remains subdued due to sluggish domestic demand.

Real GDP growth dropped gradually from 13.5 percent in 2014 to a contraction of 0.5 percent in 2018, following the end of the LNG-led construction boom by 2014, the commodity-price shock and a negative El Niño impact in 2014–16, and a 7.5-magnitude earthquake that led to a temporary production shutdown in the extractive sector in the first half of 2018.

Real GDP growth is forecast to jump to about 5.6 percent in 2019, following a recovery in extractive-sector production, and hover between 3.1-3.5 percent in 2020–21, supported by proposed investments in several large resource projects.

This outlook is subject to downside risks ranging from the domestic political economy to the recent escalation of trade tensions between the United States and China.

The successful placement of a US$500 million 10-year sovereign bond and the attraction of bilateral and multilateral budget-support loans has created some breathing space for both government and businesses since late-2018, allowing some of the foreign currency backlog to be cleared and imports to resume in the first half of 2019.

However, these gains are at risk of being lost if the authorities do not return to the earlier-adopted fiscal-consolidation path and refocus on establishing a more flexible exchange rate regime.

The central bank focused on strengthening monetary policy and addressing the backlog of foreign exchange orders, while the exchange rate adjustment has slowed.

The fiscal policy stance became expansionary in 2018–19, following higher revenue from the resource sector and higher government spending (compared to the low base of 2017). The 2018 budget saw a large unbudgeted increase in the government wage bill (personnel emoluments); if this continues, it risks undermining the positive efforts the authorities have made to stabilize the public finances and the macroeconomy.

The current Medium-Term Development Plan for 2018–22 (MTDP III) lays out a comprehensive strategy for delivering on the country’s development aspirations over the next half-decade.

The MTDP III focuses on developing physical and human capital and strengthening governance and institutions, as the most critical cross-cutting areas for development. It also looks at sector-specific issues and identifies a set of implementation actions for each priority sector.

Agriculture is one of the priority sectors due to its size in the economy and the vast population living in rural areas that is involved in subsistence and cash income agriculture.

To utilize the potential of agriculture as a source of income and job creation, the authorities should consider a proposed set of policy options and responses for securing sustainable rural livelihoods in food and agriculture.

"PNG’s growth outlook remains positive but fragile due to rising economic uncertainties ranging from the domestic political economy to the recent escalation of trade tensions between the United States and China. To mitigate downside risks to the outlook and better weather external shocks, it is recommended that PNG authorities adjust macroeconomic policy and focus on structural transformation of the economy, especially in agriculture as a potential economic driver for more diversified and inclusive development."
Ilyas Sarsenov
World Bank Senior Country Economist for Papua New Guinea

Around 87 percent of Papua New Guineans live in rural areas, and 75 percent of these are engaged in a variety of subsistence and cash income agriculture activities.

Staple products are the main source of subsistence, provide food energy and protein, and are a source of food security for rural villagers when income-earning opportunities are limited.

While most rural villagers combine these traditional subsistence and cash income activities, there is a small but increasing number producing value-added products such as high-value coconut products and spices.

A broad policy consensus exists in the sector on the need to focus on both subsistence and cash income agriculture activities as articulated in the MTDP III.

The authorities should focus on improving cooperation and institutional capacity and providing innovative policy solutions by building partnerships between the public sector and the private sector.

The focus on delivery support to subsistence and cash income agriculture activities is important, not only because it provides rural villagers with alternative sources of income; it also provides food security when cash income activities are limited.

Inevitably, institutional cooperation and capacity building—involving both the public and private sectors as well as civil society and non-governmental organizations—will not only be effective (by impacting rural livelihoods) and efficient (by reducing delivery costs), it will also ensure a wider distribution of benefits for rural villagers.