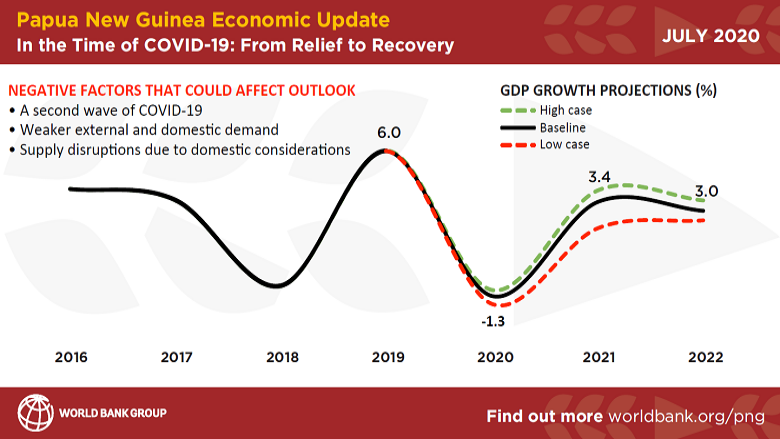 This publication is the fifth in the current series of PNG Economic Updates. It has two principal aims: First, it analyzes the key recent developments in Papua New Guinea’s economy and places these in a longer-term and global context. Second, the publication provides a more in-depth examination of a selected development issue and evaluates the implications of recent trends and policy reforms in terms of the government’s stated development objectives. This publication has a special focus on the need to scale-up investment in physical infrastructure for sustainable development within Papua New Guinea.

PNG Economic Update in the Time of COVID-19: From Relief to Recovery — Download full text [PDF]

Pandemic-related global and national movement restrictions have weakened external and domestic demand and affected commodity prices, which will lead to an economic contraction, wider financing gaps in the external and fiscal accounts, and higher unemployment and poverty than previously anticipated in 2020.

At the same time, gold prices are at near-record highs, fuel import costs are falling, and Papua New Guinea is not highly dependent on foreign tourist income or remittances from abroad, softening the impact on the external accounts. Lower prices for liquefied natural gas (LNG) will have a limited impact on government revenues, as resource revenues remain small.

Australia, a significant trading partner, has also successfully contained the virus so far, providing hope that regional economic disruption will be lower than in Europe or the Americas.

In early April 2020, the government mobilized its resources and appealed to development partners and the private sector for additional support to protect the lives and livelihoods of vulnerable households and businesses. The ensuing package of health and economic support measures totaled roughly PGK 1,835 million (about US$530 million or 2.2 percent of GDP) in 2020.

The tax authority provided deferrals for tax filing and payment for two months and prioritized processing of goods and services tax refunds for medical supplies. The central bank injected additional liquidity into the system and provided foreign currency for COVID-19-related purchases of medicine and medical equipment.

While the focus of the authorities is currently on crisis mitigation measures, they should also look beyond the current year at a more robust and resilient recovery over the medium term

Economic growth in the medium term will be supported by foreign investment in new resource projects, including the Papua LNG (liquefied natural gas) project, the Wafi-Golpu gold and copper mine, the P’nyang gas field, and the Pasca A gas condensate field. Potential expansions of the existing Porgera gold and silver mine (subject to its license extension) and the Ramu NiCo (nickel and cobalt) mine would also contribute to the impending investment boom.

However, considering that the economy entered the COVID-19 crisis with a poor record of resilience to external shocks, it will be vital to set the stage for more sustainable and inclusive development by strengthening macroeconomic management and accelerating structural reforms while protecting the vulnerable.

Providing equitable access to quality infrastructure is one of the most important ways a country can reduce poverty and enhance sustainable growth. By building and maintaining appropriate infrastructure, Papua New Guinea can work toward better living standards for its citizens and toward greater, more sustainable economic growth.

The country has an abundance of natural energy resources—hydropower, natural gas, and solar—but they are underutilized: less than 250 Megawatt (MW) of its hydropower potential of 15,000 MW is harnessed, and the country exports liquefied natural gas but imports petroleum products to generate electricity.

Only about 13 percent of the population has access to on-grid electricity and about 25 percent to off-grid electricity. Even among those who have access, the cost of service delivery is high, and the supply of power is unreliable.

About 35 percent of the population lives more than 10 km from a national road, and 17 percent have no access to roads at all, making aviation and maritime shipping crucial transport modes.

While the airport at the capital, Port Moresby, has been upgraded, the condition of the country’s other airports has deteriorated over time.

Communities without access to road and air travel rely on riverine and littoral maritime transport, but maritime and waterways infrastructure is mostly rudimentary and is dangerous for both passengers and cargo to use.

In recent years, there has been a gradual increase in the number of households with improved water supply, but overall access is still among the lowest in the world

As of 2017, 41 percent of Papua New Guinea’s population had access to safe drinking water—35 percent of the population in rural areas, and 86 percent in urban areas—but rural access to sanitation stood at 8 percent and urban access at 48 percent.

In the current situation, poor access to handwashing facilities results in poor hygiene and impedes effective measures to control the COVID-19 pandemic.

The average incidence of diarrheal diseases in children (under five years old) in Papua New Guinea is 243 per 1,000, although in some provinces the number exceeds 500 per 1,000 children.

Access to information and communications technology (ICT) services has increased slowly in recent years and prices have fallen, though significant gaps remain

However, fixed and mobile subscriptions combined cover just 11.4 percent of the population.

Prices for ICT services, which have consistently ranked as some of the highest in the world, have declined in recent years owing in part to regulatory intervention.

In spite of these constraints, there is also much to build on. The abundance of natural resources provides the country with significant financial means

In the energy sector, for example, the government has set the ambitious goal of reaching 70 percent access to electricity by 2030 and becoming fully carbon-neutral by 2050. It is already working to implement the National Electrification Rollout Plan for the country with support from development partners.

In the transport sector, improving transport infrastructure with sustainable and disaster-resilient qualities is a national-level priority, to which both the government and development partners are strongly committed.  The sector has gone through comprehensive assessments such as expenditure and institutional reviews and has embarked on a comprehensive reform to enhance efficiency.

In the water and sanitation sector, transformative policies and regulation are ready to be approved. Two water utilities serving urban areas are, despite some inefficiencies, strong enough to potentially play an important role in further expanding water and sanitation coverage in peri-urban and rural areas.

Papua New Guinea can improve its infrastructure situation by strengthening policy design, investment planning, and coordination among agencies and with development partners

It will also be important to introduce good sectoral and corporate governance and accountability, improve the operational and financial performance of the agencies in charge of infrastructure, and improve the balance between infrastructure investment and maintenance.

In addition, it will be increasingly important to find ways to involve the private sector in providing and maintaining the country’s infrastructure—for that, adequate regulation is a must.