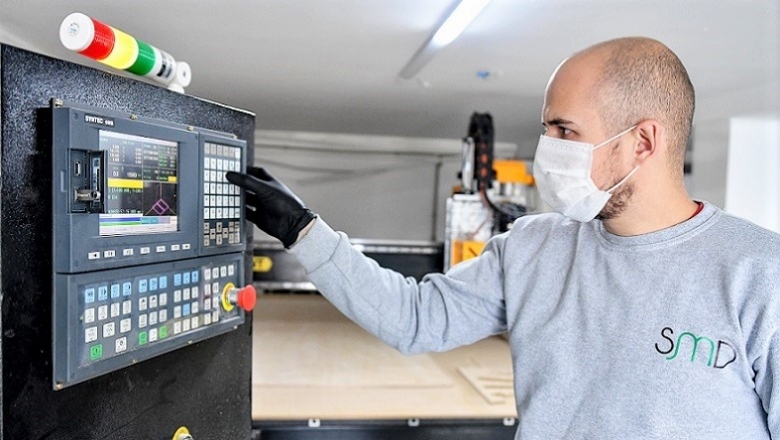 When the government of North Macedonia ordered shutdowns in March 2020, in response to the unfolding COVID-19 pandemic, it also approached the World Bank in search of co-financing support for the implementation of a wage subsidy scheme. The scheme was designed to provide salary subsidies to adversely affected firms for three months (April, May and June) to enable these firms to meet their immediate liquidity needs, retain employees, encourage operational upgrading, and spur an economic recovery.

In order to meet this request, the World Bank utilized a Contingency Emergency Response Component (CERC) - embedded in the Local Roads and Connectivity Project (LRCP) - which could immediately be triggered and mobilized in the event of a crisis, such as this one. The result was an agreement by the World Bank to utilize €37 million from the LRCP to contribute to North Macedonia’s €80 million wage subsidy scheme.

The World Bank helped design the support scheme and provided technical support to introduce a strong accountability and grievance mechanism, as well as increase transparency on the use of resources. Elements that contributed to this goal included the conversion of the subsidy from a reimbursable grant into a non-reimbursable one to allow companies to invest in improvements that could help them recover from the crises, and the publication of a list of all recipients and follow-up actions that could better ensure companies used the subsidies to pay salaries.

This support was timebound (from April to June), limited to viable small and medium-sized enterprises (SMEs), and covered 50% of social contributions from employees for viable firms in tourism and transport – two of the hardest hit sectors during the pandemic.

Approximately 20,000 companies (1/3 of all active companies in the country) benefitted from this wage subsidy scheme, helping over 120,000 employees (1/3 of all private sector employees). According to studies conducted by local non-governmental organizations, this measure cushioned the impact of the slowdown on the Macedonian labor market, preserving 80% of the most vulnerable jobs and forcing the private sector to release just 3% of their employees since the onset of the crisis.

Following the completion of this intervention, the World Bank conducted simulations to assess the project’s impact on poverty (defined as the proportion of individuals living with less than $5.50/day) vis-à-vis two other government programs adopted in response to COVID-19 (payment cards for the unemployed, and vouchers for domestic tourism and a domestic payment card for low-income employed citizens). Assuming the crisis lasts two quarters, the simulation showed that, in the absence of a government response to the pandemic, poverty would likely have increased to pre-2015 levels (figure 1) and more than 130,000 Macedonians would have fallen into poverty.

The results of this simulation suggest a partial mitigation of the impacts of the crisis on poverty as a result of these three government response measures. Wage subsidies are estimated to have increased incomes along the entire income distribution and likely substantially contributed to the reduction in poverty, while vouchers and payment cards are likely having the highest impact among those at the very bottom of the income distribution. 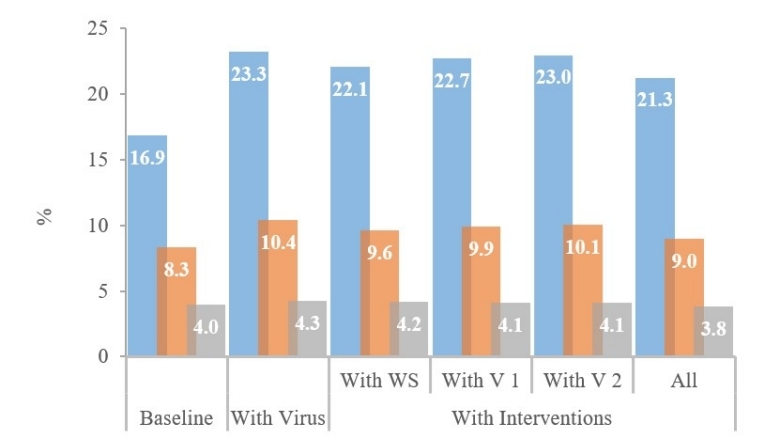 Source: World Bank simulations based on 2017 income data from the Survey of Income and Living Conditions (SILC). Note: “Baseline” refers to poverty as estimated in 2019 based on household survey data in 2017 and growth in real GDP per capita, using the original 2011 PPPs. “With Virus” refers to the situation after Covid-19, but before interventions (assuming the crisis lasts 2 quarters); “WS” is Wage Subsidy; “V1” is payment cards to unemployed; and “V2” is vouchers and payment cards for low income employees. “All” refers to all interventions together. The figure shows the proportion of poor people based on: upper middle-income class poverty line of US$5.5/day, lower middle-income class poverty line of US$3.2/day, and international poverty line of US$1.9/day.

Altogether, these simulations suggest that the three interventions undertaken by the government of North Macedonia have likely offset the impact of the Covid-19 pandemic on the lowest income quintile and reduced other measures of poverty closer to their pre-pandemic levels. Despite these positive results, the analysis also suggests that more than 90,000 individuals may still have fallen into poverty. As the crisis appears to be extending beyond the simulated impact timeframe of two quarters, it will be important to consider additional potential scenarios.

While the simulations suggest that the government schemes partially mitigated the impact of COVID-19, such crises response measures should be limited over time. Once the government shutdown is lifted, the focus should shift towards improving firm productivity, in light of the new situation being created by the pandemic.

Specifically, government financing could facilitate access to soft investments where there are clear market failures – including pre-investment support and advisory services such as finding new markets, improving managerial practices, digitalization, development of new products and services, and adjusting processes.

Given that the needs of the private sector are large and government resources scarce, the government should focus on crowding-in private financing to support firms through hybrid investment funds and partial credit guarantee schemes for bank loan portfolios - in particular for supporting firms in accessing hard investments like machinery, equipment, infrastructure upgrades, and others.