Moreover, assets are not performing as expected, and the system of irrigation is outdated. Water prices are set below costs, driving up sector financial losses and further delaying overdue investment. Agriculture, mining, and industry, in an attempt to avoid economic losses due to irregular supply from water utilities, have turned to widespread and unsustainable use of groundwater.

The effect of climate change on FYR Macedonia’s water supply is estimated to be large and widespread, occurring as early as 2020 in most places in the country, but with larger reductions in mean annual volume of water through 2050 in rivers as temperature increases and rainfall declines.

Changes in rainfall amounts as well as their temporal and spatial patterns will reduce water availability and increase competition across consuming sectors--agriculture, hydropower, thermoelectric cooling, and industrial and municipal demand--especially at times of peak demand.

Opportunities for Green Actions: The overall demand-supply gap in the water sector must be managed in all water-using sectors, with a big emphasis on improving efficiency and strengthening conservation. For example, the growing scarcity of water can be addressed by reducing inefficiencies through pricing and regulation of groundwater, and through rehabilitation and maintenance of existing infrastructure. 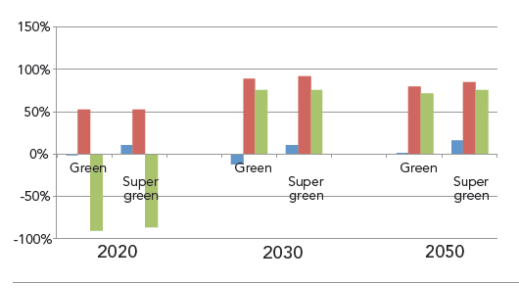 In the municipalities and industry, the water demand-supply gap is modest and drops significantly in both scenarios. In irrigation, the impact of green investment on water demand is modest overall, with a high variance across basins. Adaptation investments will reduce water demand by implementing basin-scale irrigation improvements and drainage infrastructure upgrades, replacing and rehabilitating broken-down assets of the current irrigation infrastructure and creating a new irrigation system that is adequate for a modern system of farming.

As for thermal energy, water shortages will persist for some plans, even with strategic reservoir management. The demand-supply gap in 2020 is about 90% higher in both scenarios but will then drop significantly for both 2030 and 2050.